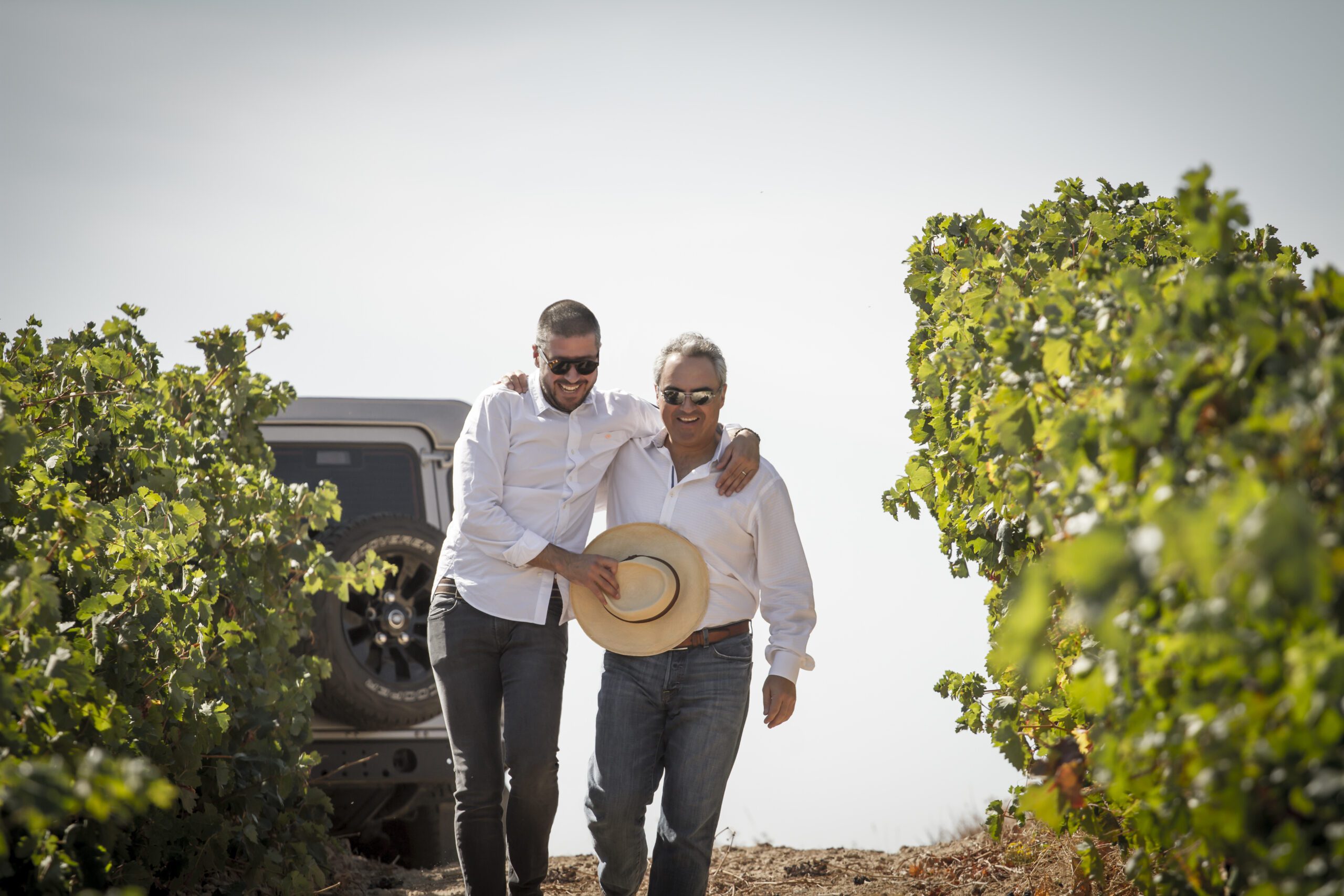 The story of Bodegas Pinea Wines began with two childhood friends with a love of Ribera del Duero and a goal of making some of the best wines in the world in a region with a pedigree to do so.

Bodegas Pinea came about when Hugo Del Pozzo and Vicente Pliego decided that an 80-acre estate in Ribera del Duero’s “Golden Mile,” a region known for producing some of the best Spanish Tempranillos, was going to be the place where they made their dream come true.

This place was a family-owned estate that was known for the quality of its grapes with well-established wineries. Vincente was already a winemaker with a winery close by at the time and sourced his grapes from the family.  The estate wanted the vineyard to go to someone who would take care of the land and they made the deal with a handshake in 2016. Then Hugo stepped in to raise the money from private equity and personal investors.

They quickly came up with the perfect name, Pinea, after the majestic stone pine on the property. The Pinea tree had a special meaning for both as Vincente once only shared this place with his family until he introduced it to Hugo.

The Pinea estate is located near the towns of Olmedillo de Roa and Villatuelda, in the heart of the Ribera del Duero, at an average altitude of 3,050 feet above sea level.

Even though Vincente is involved in winemaking (rosé and wine operations), making one of the top wines in the world was something they were very serious about. They hired Isaac Fernandez, a well-known oenologist and winemaker at Bodegas Mauro, which was founded by his uncle, Mariano Garcia, one of Spain’s most famous winemakers.

The team utilizes a multitude of Old Vines ranging from 20 to more than 90 years in their winemaking, with a focus on using location, elevation, slopes and soil to create wines with character. Deeply structured rooting systems allow for vines to thrive under extreme temperatures without artificial irrigation. The fruit benefits from seasonal extremes in daunting weathers and temperatures. The vineyards are farmed using sustainable methods.

But the journey hasn’t been an easy one. Based on Hugo’s story of how trials and tribulations have turned to blessings, they haven’t missed a beat. First, it started in 2016 when they bought the vineyard, not the grapes. They realized the fruit was sold to someone else that year so there was no production in 2016. But you should taste the 2017 and 2018!

The second was when they debuted the first KORDE Rosé. Originally, all inventory was sold to a distributor in Switzerland who backed out during the pandemic. Luckily, Hugo was able to quickly find places like Central Market to take the wines and it recently scored over 90 points in the Wine Spectator.

The latest was when they put a winery with a working windmill under contract. As they uncovered more details about bringing it to working order, they realized there was too much risk. Due to that deal not proceeding, they were able to purchase another winery closer to the vineyards this year that will open at a future date.

Today, they still operate the existing winery, located in the Golden Mile, but will eventually transition to the new location.

Bodegas Pinea has three brands, and I was able to try four wines, which were all 100 percent Tempranillo.

Hugo spent some time talking about the barrels coming from the same cooperages as you would find in a DRC wine.

We started with the 2020 KORDE Rosé, a 100 percent Tempranilo Rosé, meaning connection of heart, in a local dialect. Hugo talked about how 2020 was an amazing year of viticulture, and this is the first Pinea wine to showcase the vintage. The wine is fermented in ceramic eggs and aged in French oak barrels from the famous tronçais and bertranges forests.

It was a savory wine with notes of raspberries, orange peel, flowers, vanilla and bready notes.  This is not your typical summer rosé. It is full bodied and can stand alone or with food.

Pinea’s label, “17,” is named for the year when Pinea first released its wines on the market. The number 17 resonates with the winery because of the 17 acres it owns. The number even has a connection to professional golf.

In 2017, Spanish golfer Sergio Garcia’s won the Masters tournament. Hugo knew he needed to find a way to reach Sergio to see if Pinea’s wines could be featured at the Champions Dinner. The dinner is a tradition started by Ben Hogan in 1952, where the previous year’s winner hosts the dinner honoring past champions in Augusta’s clubhouse on the Tuesday night of tournament week and gets to choose the entire menu and wines.

He figured out a way to connect and they actually served the “17” at the dinner and later gave a bottle to each guest at their wedding. Sergio even invited him to come to the Master’s. Not surprisingly, the wine was a success.

The 2017 Pinea “17” was impacted by the worst freeze to hit the region in 25 years. The yields were lower than in other vintages, but this concentrated the potential and quality of the grapes. The vines selected are between 30 and 70 years old and come from vineyards that are located in the highest areas of ​​the Ribera del Duero, about a 3,050 feet elevation.

We moved to the 2018 Pinea “17”, which was aged in 60 percent French oak and 40 percent American oak. I tasted notes of red and black fruit, vanilla, cedar, cocoa and plum.

Our last wine was the 2017 Pinea Tempranillo, which was a masterpiece with balance, aromatics and elegance showing the power of this grape and region. The wine comes from seven primary vineyard parcels with different soil characteristics, slope and vines that range from 30 to over 90 years.

What surprised me is how approachable all of these wines were today – there’s limited time spent pondering what the wine could be. It’s delicious and drinkable today.

At the end of the conversation, Hugo summed it up perfectly.   “The vines and grapes are showing us a place of origin that is a worthy reflection of the Ribera del Duero. We just focus on transferring the vineyards to the glass and that’s how we make our dreams of creating some of the best wines in the world a reality,” he said.