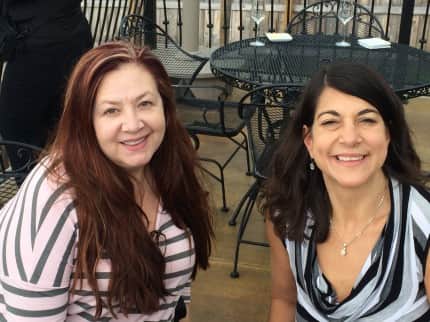 It’s been about three weeks since I got back from the Wine Blogger’s Conference (#wbc15) in the Finger Lakes and it’s always a struggle to encapsulate such an amazing exploration into the wine and the region along with the personal stories that make the conference.  Most of us take the easy way out and do a compilation article, well…including me.

So here it goes. 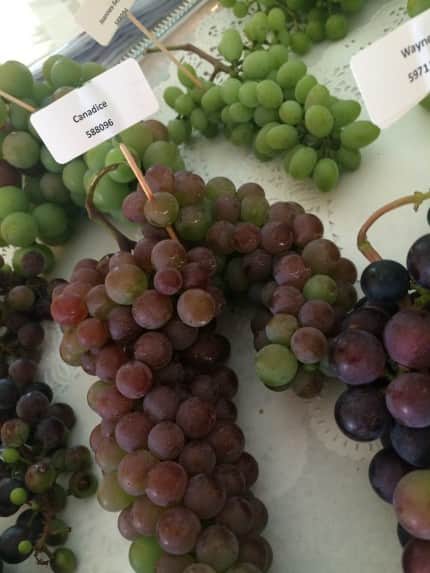 #1 – Prepare to check what you think you know at the door.  I knew that I’d taste some great Rieslings and Cabernet Francs, but I didn’t expect the diversity that I discovered the conference.  I tasted roses, sparking wines, sauvignon blancs, chardonnays, albarinos, cabernet sauvignons and even merlots.  There are more than 100 wineries centered around the region’s four main lakes – Cayuga, Seneca, Keuka and Canandaigua – and more than 400 wineries overall with such diversity in the terroir.  These wineries yield 90 percent of the New York wine produced each year.  Then there is Long Island, which we didn’t explore, which has approximately 25 varietals planted across 2,500 acres.  New York’s biggest issue is actually getting the wines out of the New York wine buying community on to a national stage. 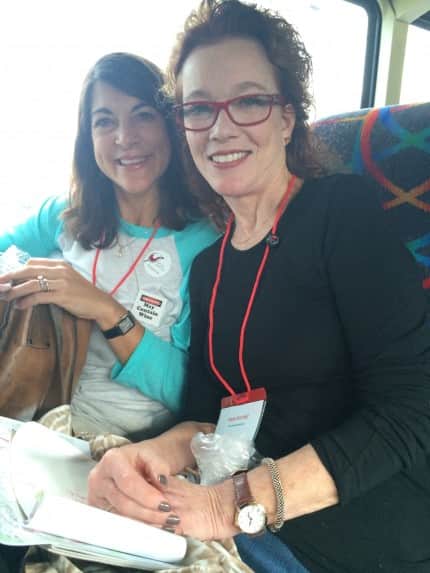 My Bus Ride with Karen

#2 – Meet amazing people.  I was more than excited when Karen MacNeil, author of the Wine Bible and accomplished wine expert and amazing writer, was named the keynote of the conference.  I admit I was a little in awe of her – moving to New York in her Volkswagen Bug with $6 in her pocket and taking on three jobs to make ends meet.  After 324 rejection slips, she received a $30 gig writing about butter in the Village Voice.  This launched her career.  Eventually, she was invited to attend tastings with a small group of men considered the who’s who in the New York wine community.  Karen told us “I didn’t talk for eight years – I just wanted access to the wines.” Clearly she found her own voice and worked for ten years on what became the first edition of the Wine Bible.

Her advice – tell your story; find your style; hone your writing; know your subject well; and represent yourself well.  I loved her quote about never stripping wine of its culture. Karen said,” There is no way to understand Malbec without understanding the tango.”

When she sat next to me on the bus to the wine excursion, I admit I was excited.  But we had such a fun conversation about wine, kids, work, the future and everything in between.  Everyone asked me what we talked about for almost two hours.  You know – it felt like an honest conversation with a new friend, so it won’t be part of my blog.  But, trust me, her next chapter will continue to change the wine world. 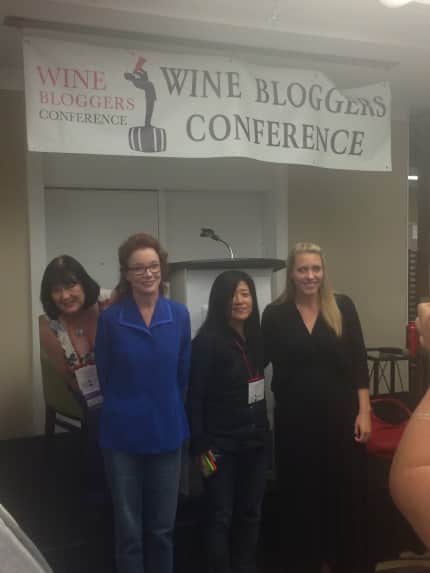 The next day, my friend, Amy Powers Corron, moderated the Women in Wine panel of amazing women with Karen; Stevie Kim, founder of VinItaly; and Meaghan Frank, General Manager of Dr. Frank’s Winery in The Finger Lakes.  They talked about the generational differences that were apparent depending when they were moving up in the wine world.  Stevie’s presentation showed that the glass ceiling is still intact.  Women are lagging or almost non-existent in the top power positions.

#3 – One person can make a difference (so can you – think about who you know).  I’m on the scholarship committee and I’ve been thinking about how we need more diversity in our blogging community.  My uncle happens to be the president of EthniFacts, a multicultural knowledge and insights consultancy.  We brainstormed how they might be a fit and they funded the “EthniFacts Diversity in Wine Writing Scholarship,” to encourage ethnic, gender and cultural diversity in the North American Wine Bloggers Conference attendees.  Then when my Facebook friend, Regine Rousseau of Shall We Wine! was named, the recipient, it became even more special. 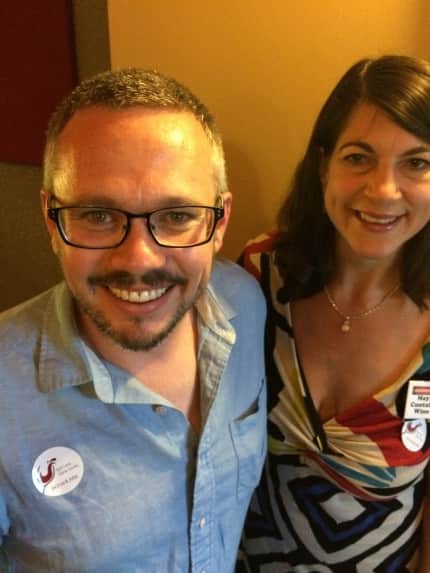 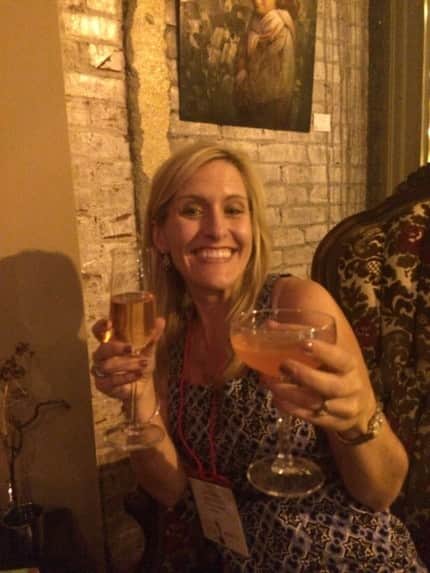 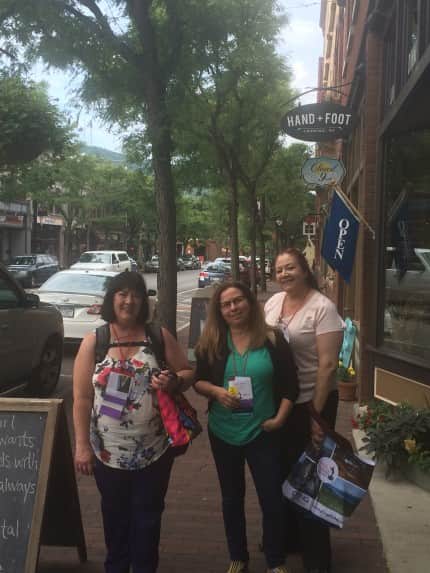 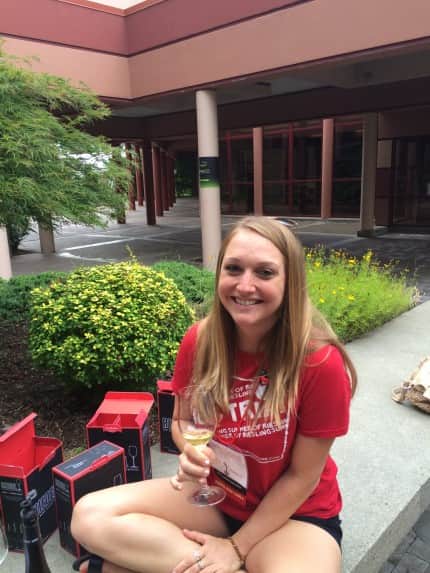 Constance and her older Rieslings 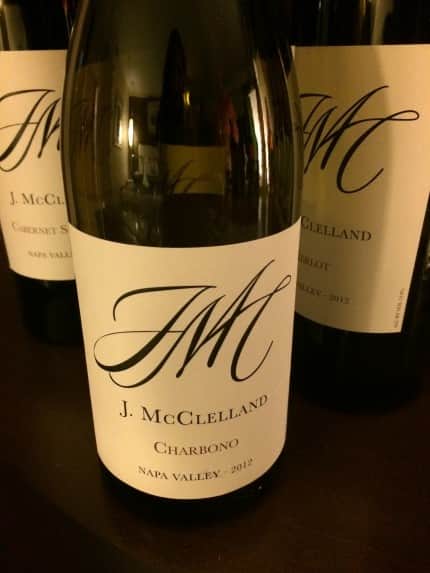 #4 – Color outside the lines. #goingrogue will continue.  There is a fine line between experiencing all the great things the conference has to offer and exploring the community and hanging out with friends.  This year, we stayed offsite at a really cool place just down the street from the Radisson.  It gave us the freedom to explore the restaurants – like Hand & Foot, which became the unofficial stopping point of the Wine Bloggers Conference crowd.  Going to Craig Camp’s Cornerstone offsite non-awards dinner was another classic moment of sitting down with my favorite people and drinking amazing wines.  Eating pizza with Robert Larsen from Rodney Strong Vineyards and Amy Gross of Wine4.Me along with Fox Run Vineyards and Anthony Road Wine Company.  From drinking vintage Riesling wines with Candace Chamberlain to hanging at the Jordan party to trying some amazing new release J McClelland Charbono with the gentlemen from Scotto Family Vineyards and swapping travel stories, was not something I would ever have wanted to have missed. 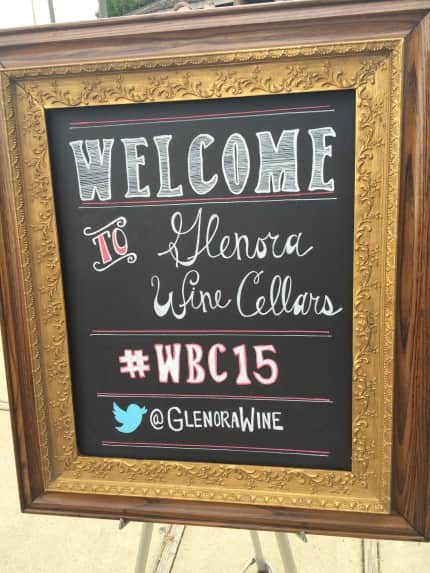 #5 – Just go where the tour takes you.  Every year people try to game the system and get on the “right bus tour.”  It took me five years to figure out that your chances of having an amazing time is pretty high.  Our tour, for example, took us to Glenora Wine Cellars.  Glenora Wine Cellars is the first winery to open on Seneca Lake in 1977. 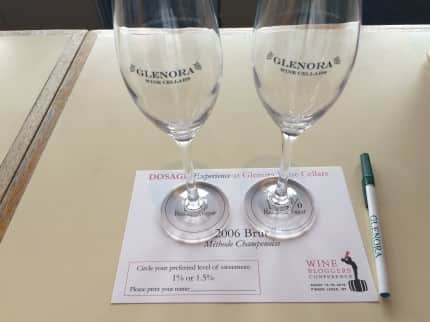 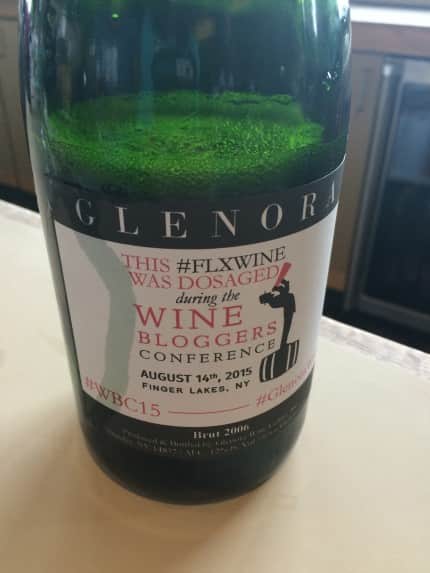 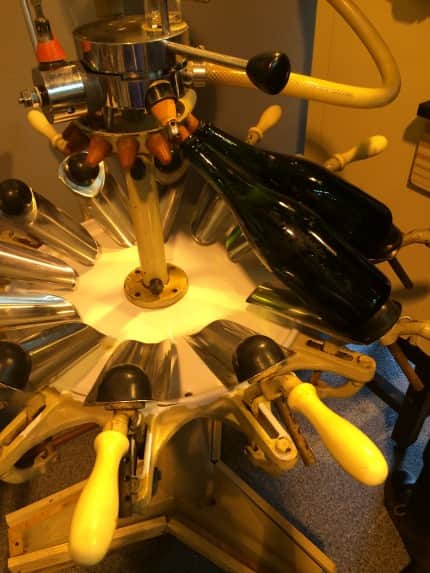 We had the chance to receive our “Master of Dosage.”  First, we chose our favorite method champenoise with either one percent residential sugar or 1.5 percent residual sugar.  Then we actually got to dose and bottle our own preference sparkling.  It was super cool and I was lucky enough to keep all my fingers intact thanks to the great training from Winemaker Steve DiFrancesco. 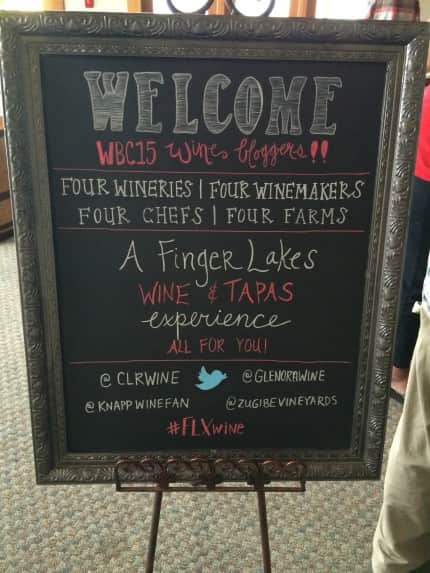 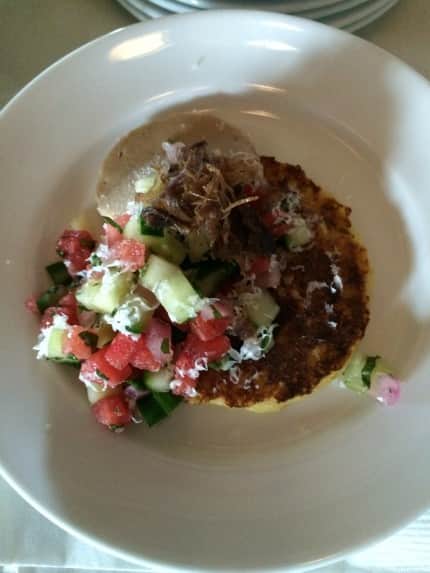 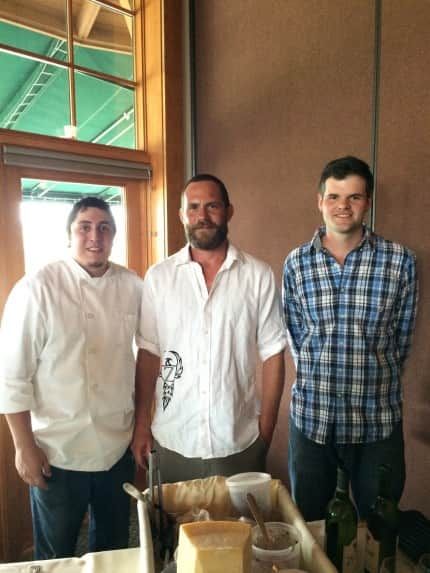 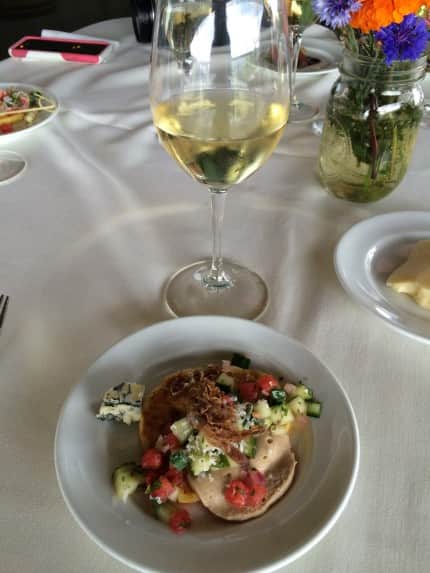 We then moved to Duck Confit with Watermelon and Cucumber Relish with a Crispy Polenta from the Executive Chef at Zugibe Vineyards. 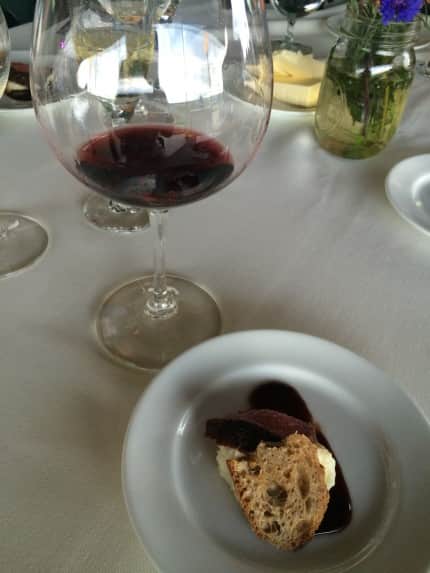 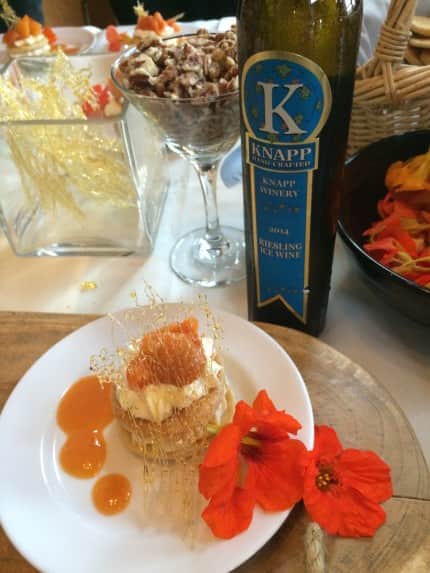 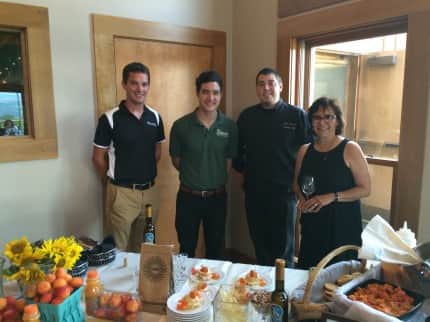 Our final course was an Apricot Napoleon with a Salted Short Crust from Executive Chef John McNabb of Knapp Winery & Vineyard Restaurant with the 2014 Knapp Winery Riesling Ice Wine.

#6 – Attend the events beyond the conference.  Whether it’s the organized pre- and –post tours that really give you a glimpse into the region or another event that has been organized, like the Santa Barbara pre-conference seminar prior to last year’s Wine Bloggers Conference, these are the sessions that allow you to really dig into a region.