Even though I’ve been now to several of its restaurants, it’s hard for me to wrap my brain around what the Village has become. I still remember it as an expansive place with affordable housing for young people. Today it’s an oasis of 500 separate buildings that include restaurants, coffee shops, a high-end grocery, a Speakeasy and retail. Memories of my husband’s minimal square footage apartment in the 90’s have been erased.

“Growing up in Dallas I either lived, worked or partied at the Village,” said Amelia Henderson, Sommelier for Anise. “It has a unique place in the lives of so many people who started their careers and independence in that complex.”

The 300-acre property has evolved to a landscape of oak trees, lakes, trails, and lots of grassy areas that close to 11,000 people call home. Meridian, Anise, La Mina, Over Under, Buzz and Bustle, Afterglow, the Roundhouse, The Village Golf Club, and its tropical bar are all open to the general public, as several retail shops. There’s a big fitness center “The Village Fit” and the once infamous Village Country Club where I distinctly remember having $1 margaritas.

Anise is a pan-Mediterranean wine bar and restaurant in The Village’s Drey Hotel, a 38-room boutique hotel. The restaurant recently announced a new Executive Chef, Rene De Leon, who has introduced a new menu. He has held positions as Executive Chef at Bullion; Sous Chef at Next and Aviary in Chicago; Executive Chef at the Dawson (Chicago), Le Sel (Nashville) and Swift’s Attic (Austin). He also worked for 7 years at Michelin 3-star restaurant Alinea.

While the property has received a complete facelift, there are several demographics that rent the apartments available as well as hotel guests who typically are more focused on experiencing the city of Dallas versus a business trip. And that diverse audience is who Amelia is trying to reach. 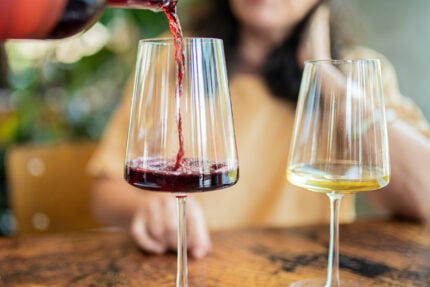 The creativity and passion to do just that is impressive. The restaurant has launched Wednesdays Uncorked, featuring half price for all wines by the bottle every Wednesday (every bottle on the list with no exclusions).

The 130-bottle list features small producers making low-intervention wines, and other interesting wines from around the world. While there is a focus on Mediterranean wines, there is a global touch to the list. “We have a hotel as a base, but that doesn’t mean we should stock it with safe choices. Everyone can make a good $300 wine, but I believe this list allows people to try a multitude of styles and experience new things without breaking the bank.”

“I also wanted to curate a list that gives college students the opportunity to venture into wine as well as making sure there is a list of special occasion dinner bottles,” Amelia said. “It’s finding something for everyone.”

Amelia really does practice what she preaches. She told me a story about a group of college regulars that come in and try whatever she is pouring. One of them recently shared that “while he’s never been to Europe, he feels like he has been because she takes him there with the many European wines he’s tried.”

The wines by the glass and in the flights below all come out of tap. She also has three separate flights that bridge different styles and price points.

Her goal here is to take people out of their comfort zone. I was thrilled when she brought this to me because I had not tried them, and they were fun discoveries.

Her goal with this flight is to have a conversation about terroir to help people understand the differences.

These wines are meant to give people more of a splurge and allow them to taste wines they may not have had a chance to taste before.

The lists revolve for all the tastings.

And when you look at her pedigree, she’s got a great one. She’s worked at Gramercy Tavern, 11 Madison Park, L’Artusi in New York.  Amelia returned to Dallas in 2014 to open Stock and Barrel, Pink Magnolia, and CBD Provisions. Her favorite selection on Anise’s opening list is the 2018 Skouras Anássa Moscofilero-Viognier blend from Peloponnese, Greece (self-described as her “yacht wine.”)

And I have a very reputable source who tells me the breakfast served there every day, with the exception of Monday, has a bread and pastry program led by pastry master David Madrid, and is incredible.

Having experienced Anise, it’s a nice way to draw people in on a wine journey and get to know a delightful person in the process. And with some of the great food we had that night – from mezzes to large plates – makes it even more fun.