A Wine Blogger’s Experience with a 3 Day Juice Cleanse

A Wine Blogger’s Experience with a 3 Day Juice Cleanse 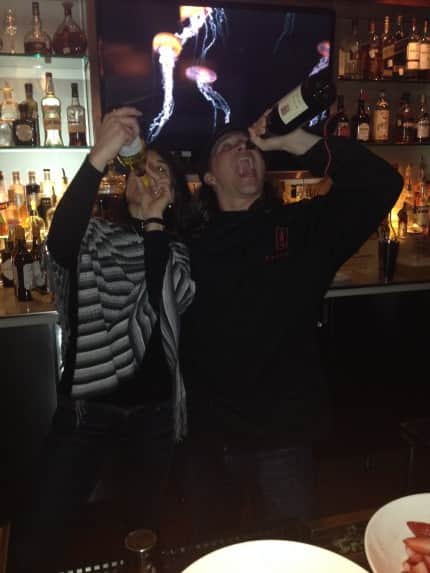 Let’s just say that when one decides to do a cleanse, a night out with “Lucky” Eddie Campbell mixing cocktails and dozens of appetizers isn’t the right way to get started.  In fact, what you eat prior to cleansing is a huge part of your success … but when you aren’t good at playing by the rules, you go your own way.  That’s where I found myself last Sunday night.

So what’s a wine girl like me doing with a cleanse like this?  While I try to eat healthy, I haven’t restricted what I eat to fit any specific diet.  I enjoy food. I enjoy wine.  But, I work for a company where eating and drinking is part of the culture and I decided it was time for a kick start after getting the weight that I gained over the last year off in the past three weeks.   And the 1,000s of bottles of wine that I have consumed over the last four years have probably taken a toll on my liver.  So, the goal of rebalancing my body was a lofty one and with Spring Break and Mexico rapidly approaching, I was motivated.

And, as many of you know, I’m competitive (understatement). My husband did a true cleanse last week and was successful.  He lost weight.  He ate less.  He was miserable.  But, I found a program from Nekter Juice Bar that seemed stringent, but less militant than the one that he did.  And if he could do it, by god I could.  I did my research online, picked up the phone and dialed the 800 number on the website last Friday.

That’s where things originally broke down.  The person I talked to told me that there was no way to get the juices to me in time for a Monday cleanse and I couldn’t order from the Dallas storefront.  Huh?  So, I used my Dallas Wine Chick handle on Twitter to inquire and got a response almost instantly.  I’m in marketing and I believe in customer service.  Frankly, the service that I got from Tiffany Carter at Nekter via social media was one that I aspire to match with the companies that I work for.  Nekter had it going on.  I had my juices (which I paid for), but Tiffany threw in an extra day that was totally unexpected and even gave me a gift card.

I did the Classic Cleanse on day one and two and the Advanced Cleanse on day three.  Overall, they tasted good.  I drank six bottles filled with vegetable and fruit juices (number 3 was tough) as well as vanilla bean nut milk (I also struggled here not being a milk lover, but this is the one my other friends’ really liked).  Every two hours, I drank the bottles in a sequential order.

How Nekter described the cleanse:

The Nekter Cleanse is like your body’s vacation in a bottle. It was created to provide your body with enough nutrients, but with minimal calories. The delicious drink formulas are specifically designed to rid your body of a toxic buildup in the organs, digestive tract, and even in the skin. Over time our bodies compile foreign chemicals and heavy metals – these come from our food, our environment and our skincare products. However, even our own cells produce toxins that are not disposed of properly when our systems are not fully functioning because of toxic buildup.

How I described the cleanse on day one:

I started the day with Insanity Pylo.  Yes, the biggest, baddest Insanity video that kicks my butt on a normal food filled day.  Why did I do this?  I have no idea.  As the day progressed, I realized something fundamental.  I. Am. Hungry.   The juices were good, but the act of not chewing was tough.  With Nekter, you have the opportunity to eat a few select things – a half an avocado wrapped in lettuce, a handful of almonds, etc.  This is different from some other cleanses in a very good way.  But rest assured, a handful of almonds does not come close to what I wanted that day.

I also found myself to be a little (okay, a lot) loopy at work with an inability to truly focus.  My Schramsberg wine club shipment arrived.  I drank my water instead.  I heard a lot about mental clarity.  That occurred the moment that I tried to go to sleep and continued most of the night as I tossed and turned …

How I describe the cleanse on day two:

Some of my favorite co-workers went to the bar.  I went to a wine committee meeting and drank water.  I watched copious amounts (okay, it just seemed like it) of wine get consumed.  Cruel and unusual punishment.   As I tossed and turned that night, I may have figured out peace in the Middle East, but couldn’t remember in the morning.  I did get a few periods of sustained sleep.

How I describe the cleanse on day three:

Overall, …. 18 juices, 1.5 avocados, Brussels sprouts, steamed broccoli, a few handfuls of nuts, three one hour workouts, a boatload of water and over 5 pounds later, I survived.  Surprisingly when I went to dig into my egg whites this morning, I found myself able to eat about a third of them and I’m stuffed.

It was a tough journey, but putting on a dress that I haven’t been able to sandwich myself into in almost 2 years absolutely made it worth it.  I don’t even want to think about the impact of the 1,000s of bottles of wine on my liver and the wine that I will drink tomorrow, but for today, I remain toxin free.  Rock on, Nekter, rock on.