A Tale of Two Cities: Trento to Verona 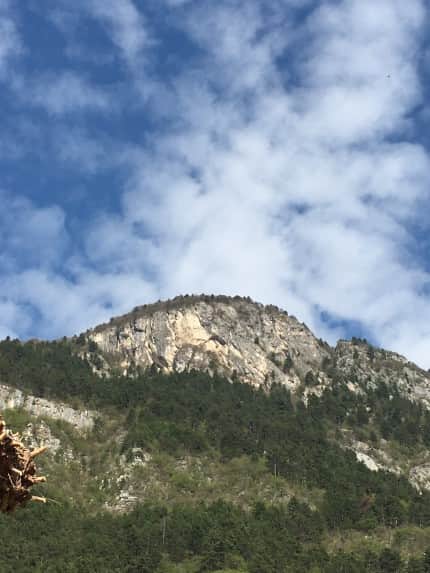 Charles Dickens started “A Tale of Two Cities” with the famous line, “it was the best of times, it was the worst of times.”  I had my own two city experience with a focus on the best of times where I was hosted by the Italian Trade Commission on a promotional tour with importers, restauranteurs and other supporters of Italian wines.  The Italian Trade Commission has a mission to promote Italian wines with US consumers, drive market share (more than 350 varieties of Italian wine are exported) and conduct trade education events. 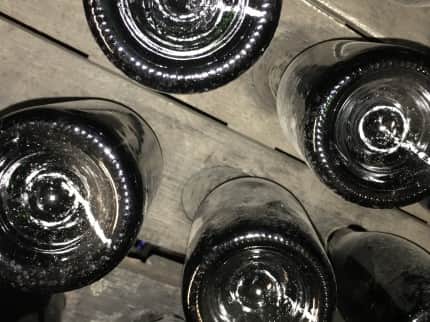 The stars aligned for me and I upgraded my flight to London so the 18-total hour trip ending in Venice with the transfer to Trento was a little less hard on the body than I anticipated.

Trento is located in the Adige River Valley in Trentino-Alta Adige/Südtirol in Italy.  The landscape in Trentino includes Lake Garda to the Cevedale Mountain range and includes the Dolomites.  The Trento Denominazione di Origine Controllata (DOC) is an appellation for white and rosé sparkling wine made in Trentino, Italy.  Our exclusive focus was on sparkling, which focused on varieties of Chardonnay, Pinot Noir, and Pinot Meunier all grown in the Province of Trento.  France, the leading provider of champagne and sparkling wines in the world, has a strong connection to the area.  When the chardonnay grapes were brought to the country in 1900 by Giulio Ferrari, Trento was still part of the Austro-Hungarian Empire.  After graduating from the Forschungsanstalt für Garten- und Weinbau in Geisenheim/Rheingau, Germany, Ferrari made champagne in Épernay.

Fast forward to 1984 and the region started a commitment to be recognized with the founding of the Trento DOC Institute.  Nine years later, it was given the DOC status.  Trento DOC produces its sparkling wines in the méthode champenoise style, which means the second fermentation for sparkling must occur in the bottle with old school riddling required along with disgorgement where you freeze a small amount of wine in the neck of the bottle and removie the plug of ice containing the lees. 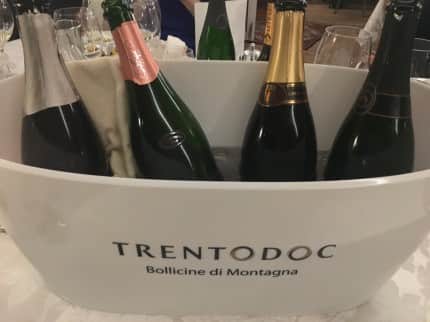 We gathered mostly jetlagged – some with lost luggage, some sporting credentials, some with more complex delays than others – all with the end goal of immersing in our experience.  I’m going to talk about our “Breakfast Club group” in a future column – but it was an amazing group of passionate wine folks that covered all stereotypes and defied them all by week end. 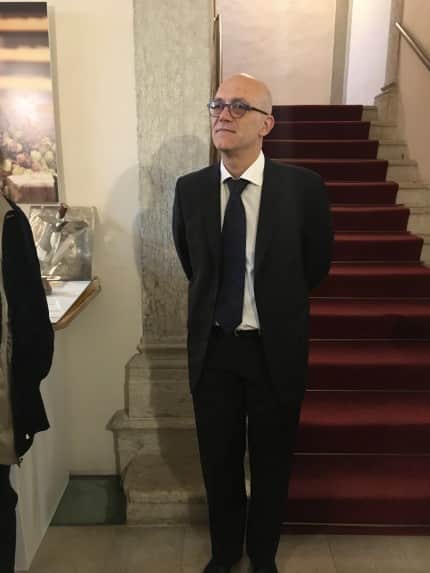 The next day we started at Palazzo Roccabruna, the Chamber of Commerce of Trento’s location, that houses the Enoteca Provinciale del Trentino (the Provincial Wine Promotion Board of Trentino) and is dedicated to the development and promotion of culture, tradition and products of Trentino showcasing the storied wine history of the region. 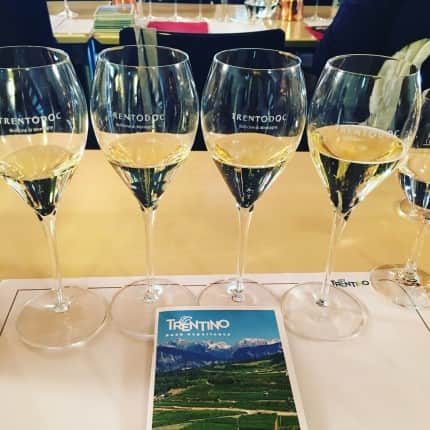 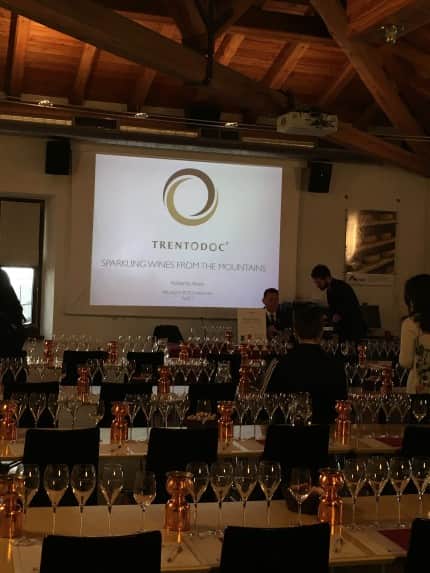 Roberto Anesi, a local wine expert, led us in a master class on eight Trento DOC wines including 2012 Revi Brut Millesimato, 2012 Tananai Brut Borgo dei Posseri, 2011 Maso Martis Dosaggio Zero Riserva, 2010 Cantine Ferrari Perle, 2010 Letrari Brut Riserva, 2009 Cavit Altemasi Riserva Graal, 2008 Cantina Rotaliana di Mezzolombardo Redor Riserva and 2008 Rotari Flavio Riserva.  The region has more than 45 producers and 100 labels.  The terroir is very diverse in climate, soil, weather and temperature.  There were lots of references throughout the two days of the “towering palisades” that are also known as the Dolomites, a mountain range that has a material impact on the region’s weather, grape growing, and how wines are made. 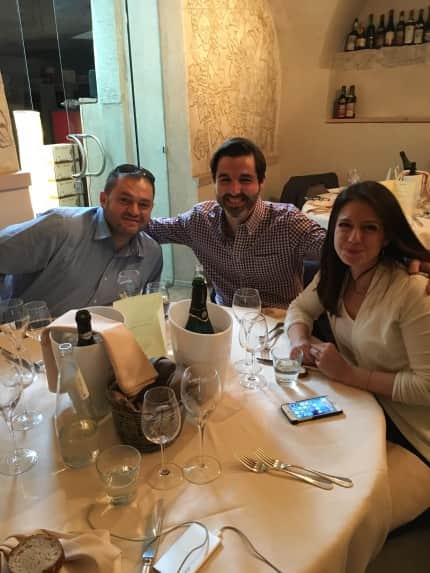 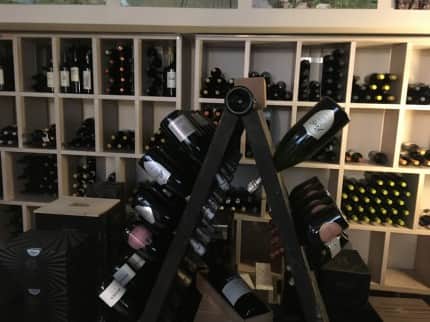 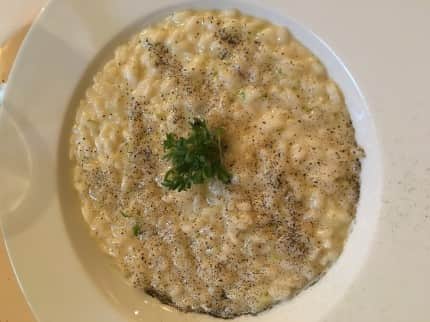 We then moved to our lunch at Scrigno del Duomo Restaurant, which was located near the historic and original wine cellar and 2,000-year-old door in the old City that came from a column from a Roman church. 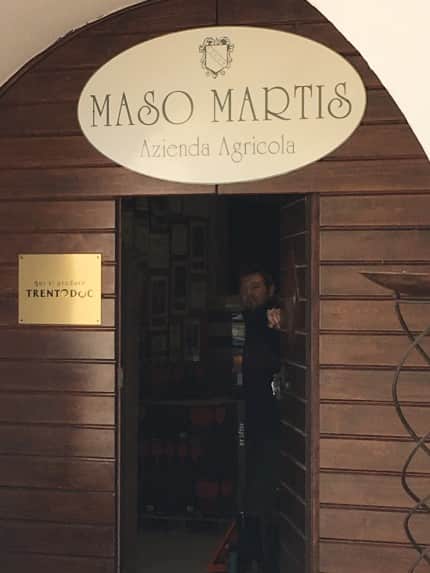 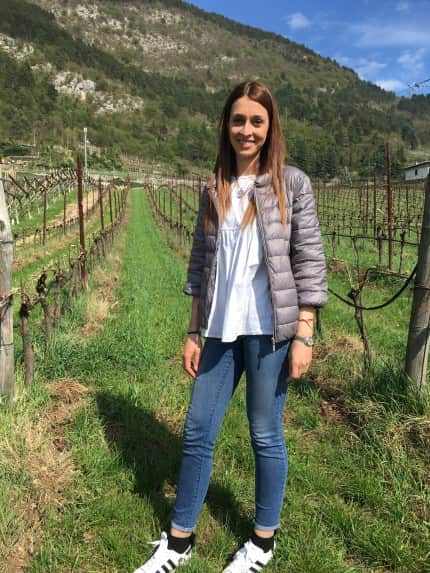 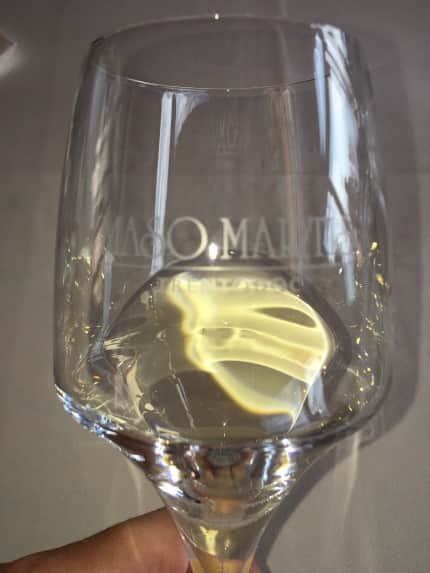 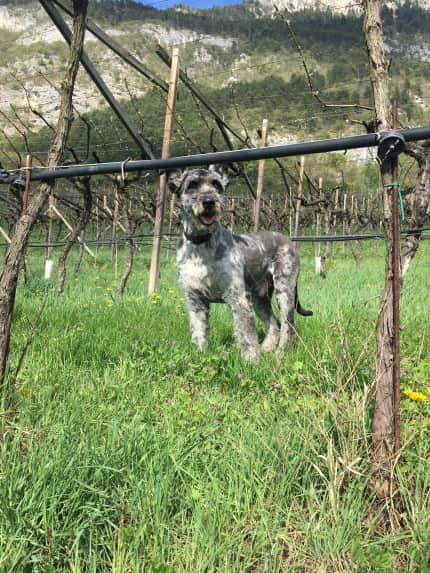 Our first winery stop was Maso Martis where we got to walk through the vineyards of this second-generation vineyard.  Maso Martis has been making wines since 1986 and is known for its terroir – calcareous soil and Trentino red rock.  Since 2013, the winery has been organically certified and makes 60,000 bottles per year with 45,000 of them dedicated to Trento DOC.  We had a chance to taste four other wineries – Maso Martis, Revi, Borgo del Posseri e Cantina Rotaliana. 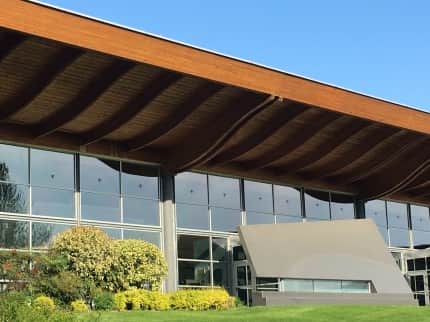 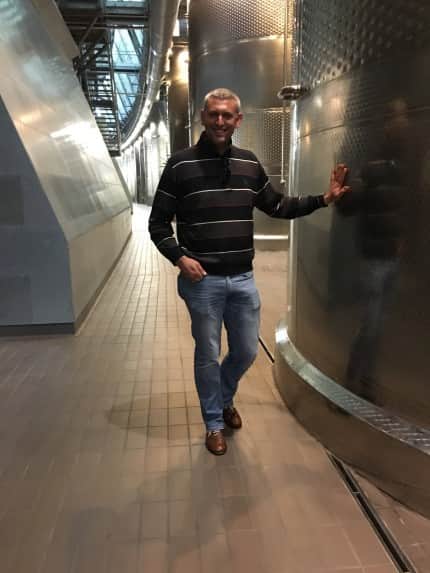 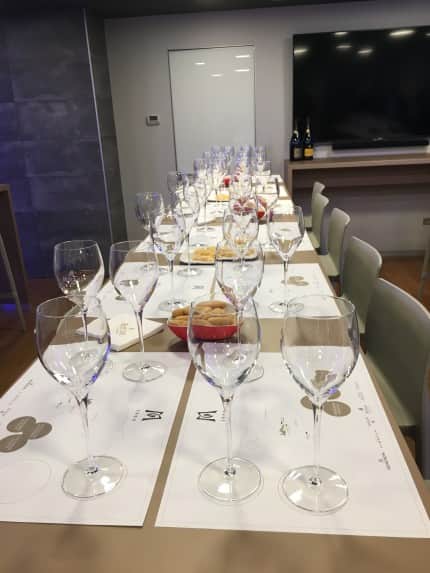 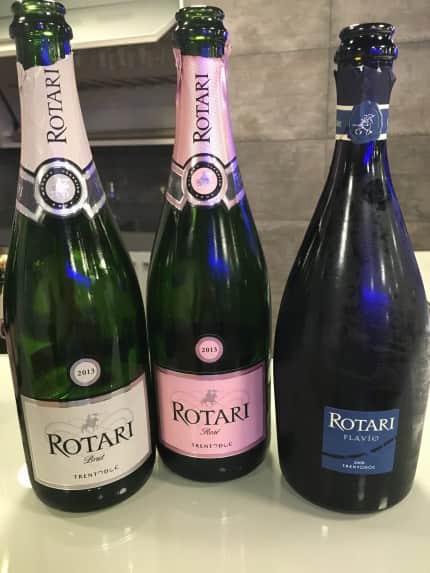 Our second winery stop was Rotari – Mezzocorona, which has been making wine since 1987 – with a very different business model of sourcing from more than 1,500 member farmers – many who do this as a second job.  This is a much bigger operation with more than 500,000 bottles hand-picked with a mix of NV and vintage affiliations.  We tried a combination of these wines and I adored the 2008 Rotari Flavio Brut, which has been made since 1998 with an average production of 5,000 to 10,000 bottles. 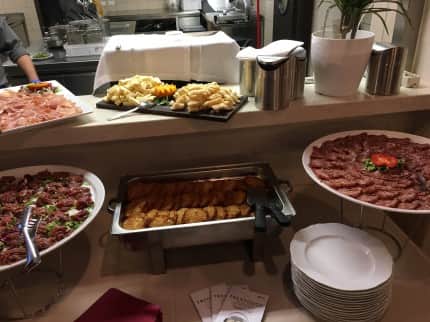 We returned that night to Palazzo Roccabruna where we were hosted at a dinner showcasing all things Trento DOC including more sparkling wines. 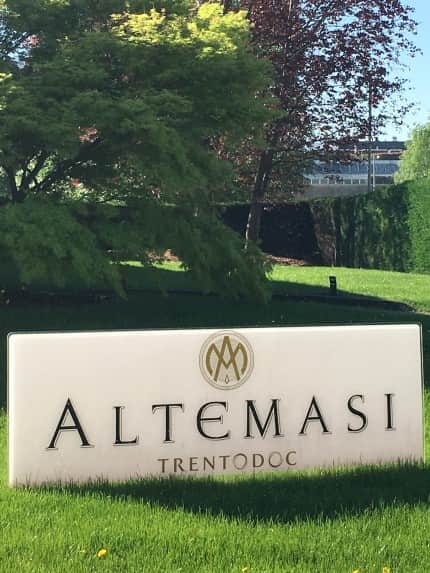 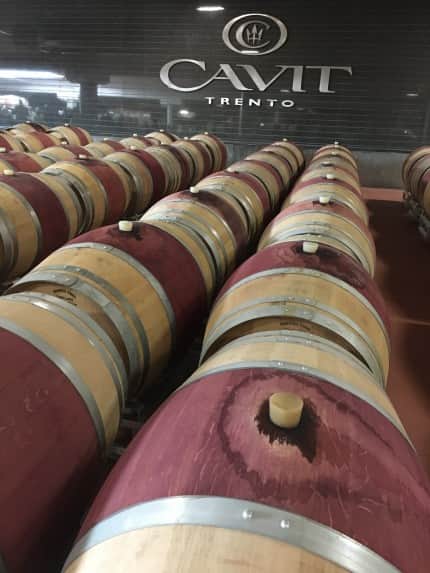 Our morning stop was at Altemasi, which is part of CAVIT’s premium range of sparkling wines focusing on the Methodo Classico winemaking procedure made from grapes from Trento hillsides, the Brentonico plateau and Valle dei Lahi Valley.  The CAVIT winery is quite the production – a four level, highly functioning, high producing and high technology facility. 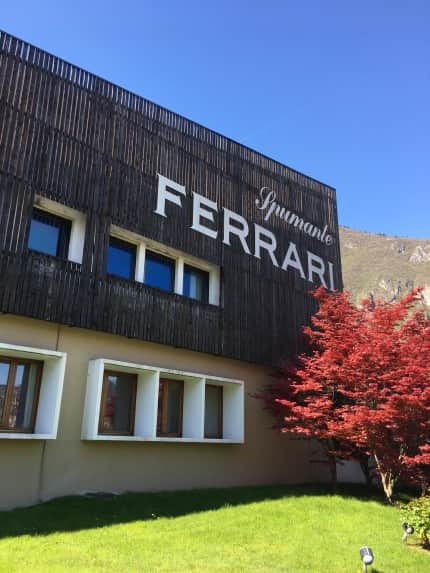 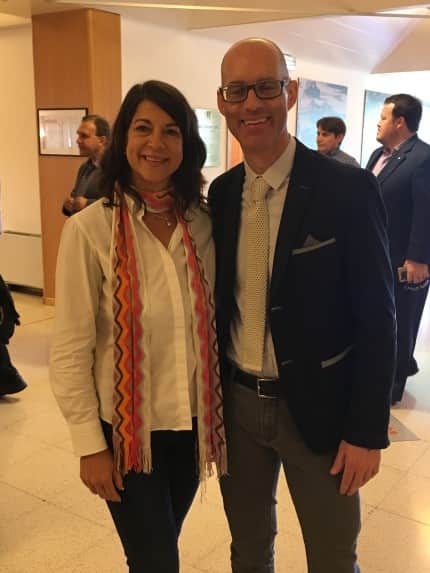 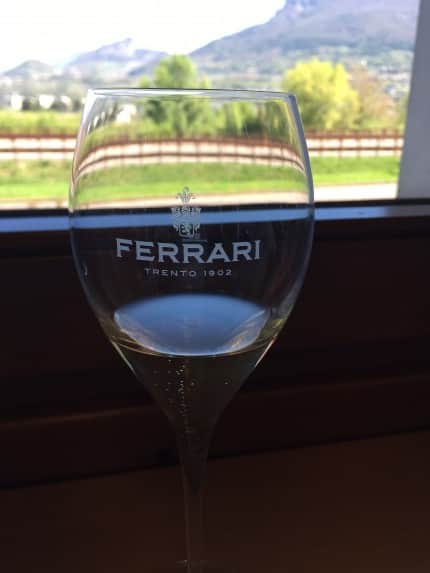 Our last stop before we hit the road to Verona was Ferrari which was led by Brand Ambassador, Jamie Stewart, who was quite the quotable and passionate host for all things Ferrari and the region.  My favorite, “the discovery of champagne was like man discovering fire for the second time.”

Ferrari started with the dream of Guilio Ferrari after working in Champagne France to create a sparkling wine in Trentino with the ability to compete with top French champagnes, which was a vision as none of the champagne grapes were grown in Italy.  He planted Chardonnay in the region and started to produce a few selected bottles with success.  Ferrari did not have an heir for the business so we started a search for the right owner to continue his dream.

He chose Bruno Lunelli, who owned a wine shop and shared the same passion.  The winery has continued to be run by family members and they kept Guilio at the winery until his death in the late 60s.  Today the winery has a large production 4.5 million bottles and are known for its brands — Ferrari Rosé, Ferrari Perlé and Giulio Ferrari Riserva del Fondatore.