A Night of Tapas and Spanish Wine

I recently attended the Lakewood Country Club wine dinner, which was Spanish themed and for the first time in a long time did not feature a particular wine maker.  It was styled as a “Spanish wine and tapas” event and focused on particular geographies – Monstant, Priorat, Rioja, Valencia, Ribera del Duero and finished with an aged sherry.

William Koval, the executive, and incredibly talented, chef who put the French Room on the map continued to wow patrons with six courses of food showcasing Spain at its finest.  And, Tony Zaranti, the club house manager who has brought Lakewood’s wine list to award-winning status, did not disappoint.

The reception began with a Gran Sarao Brut Rose Cava, which was 65 percent granacha and 35 percent mouvedre.  Basic, simple, crisp and non-fussy, it went well with Spanish themed tapas that you might be served at any bar in Spain.  In the spirit of full disclosure, during a past trip to Spain, I had so many of those that my poor husband had to honestly answer the “do I look fat in these jeans question.”  I guess after being married for almost 18 years, honesty is the best policy. 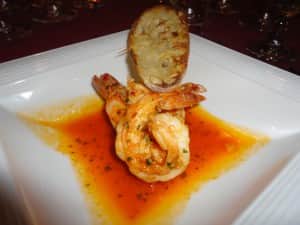 The first course served was Gambas al Ajillo with Jamon Pata Negra (garlic shrimp with Iberico ham).  Mine was slightly altered due to my pork allergy, but the 2010 Acustic Blanc from Monstant was full of passion fruit with a minerality that went perfectly with the spiciness of the shrimp.  This was a really nice, crisp, “off the beaten path” wine that is now on my buy list. 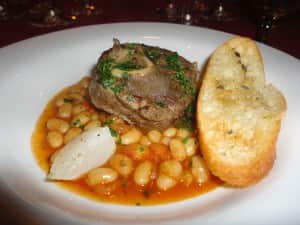 The second course was a Cucido de Cordero (lamb shank with white bean stew) served with a 09 Galena “Formiga de Galena” Priorat.  Very rich and earthy with notes of berry, chocolate and spiciness.

The third course was Abondigas (meatballs of Spanish pork, veal and beef – or just veal and beef for me) served with the 07 Marques de Vargars Rioja.  I find this to be a fine utility player wine, but it’s never knocked my socks off.  It was a nice match with some of the best meatballs I have ever eaten. 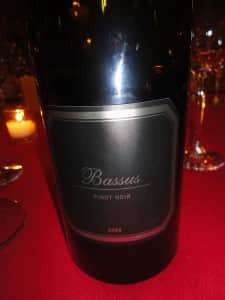 The fourth course was a Mejillones con Hinojo (mussels and fennel) with a 08 Bodegas Hispano Suizas Pinot Noir from Valencia.  It was deep, intense, floral, earthy and fabulous.  Who knew that Spain made such a nice Pinot Noir?

The fifth course was a mix of Spanish cheeses — Iberica Curado from La Mancha, Montenebro from Avila and Idiazabel from Navarra paired with the 07 Comde de San Cristobal, Ribera del Duero.  This was my favorite wine of the night.  Very complex and deep with big notes of fruit, earth and mocha.  Just fabulous stuff. 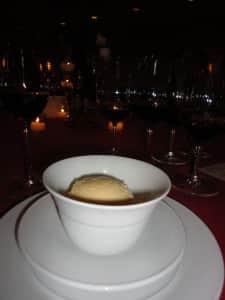 The dessert course was vanilla bean ice cream paired with an 85 Albala “Don PX” Gran Reserva sherry that highlighted everything good about older sherry.  I described it as “raisin in a glass,” but I avoided the vanilla ice cream and let the sherry stand on its own.