A Conversation with the Men behind Sartori Wines 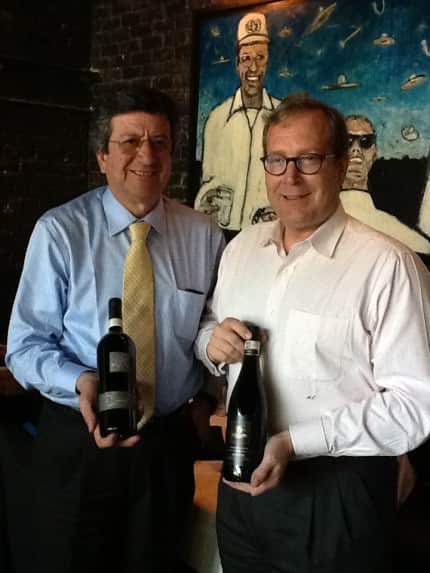 When Banfi invited me to experience the Sartori family wine portfolio, I knew I was in for some great wines and a lunch that would take me right back to my Italian roots, but without all the yelling.  I met Andrea Sartori, fourth generation of the Sartori family, and Franco Bernabei, a renowned consulting wine maker, to explore their portfolio of wines.

This was my first experience with Sartori wines, a well-known name for over a century from Italy’s Veneto region.  The family’s initial foray into hospitality was as a hotelier and later as owners of a restaurant and hotel.  In 1898, Pietro Sartori bought Villa Maria, a vineyard with a small cellar attached in the heart of Valpolicella, to source good wines for his hotel and as a small cellar for the family’s personal consumption.  Pietro’s son, Regolo, an Air Force officer in the first World War, sold the restaurant and declared the future of his family was in wine. By the 1950’s, Regolo’s two sons expanded the winery with an eye on expanding its distribution outside of Italy.

In the late 90’s/early 2000’s, Andrea Sartori, Pietro’s great-grandson, took over the business. Soon afterward, in an effort to get closer to the grapes, he made a decision that would turn the negociant system in Italy on its head.  In 2002, the company joined with Cantina Colognola, giving the family rare guaranteed access to more than 6,200 acres of high-quality grapes from 800 farmers in Soave and Valpolicella, where virtually no wine houses control their own vineyards.  This freed them from ‘the mercy of the market’ and gave them the ability to work with the best farmers, grapes and vineyards.  Sartori said, “People thought we were crazy, but for the first time, we had the ability to do significant projects from the ground up and farmers now owned a piece of our company.”  The two coops merged together in 2011 and these relationships as critical to their success.

Bernabei, who is a fifth generation winemaker, took the consulting job with Sartori because he is originally from Veneto and wanted to work with a family that “paid considerable attention to the history and heritage of Italian wines.”  He believes that wines should be original, traceable and carry an identity card based on the vineyard.  In harvest, the balance of acidity and pH are important. 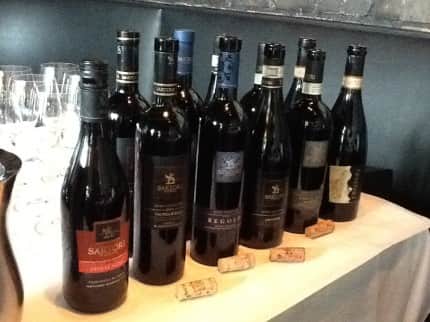 We started with the Sartori Di Verona 2012 Pinot Grigio. This wine had a mineral characteristic with floral notes, peach, citrus and pears. Bernabei talked about how this wine is treated like a great burgundy in the style it is produced. I asked him what he was going for in this wine. “I want to pick a grape and the consumer tastes the dew – it’s a perfect fruit.” He believes that winemakers should not be invasive and wines should be expressions of the vineyard.

He then talked about the trends in wine making and why Sartori will never follow the path of forcing a style that isn’t native to the grape. “The greatest wines are not forced, pushed or exaggerated,” said Bernabei. “They maintain their sense of place – we make wine with what we have. That expression can’t change,” he said. 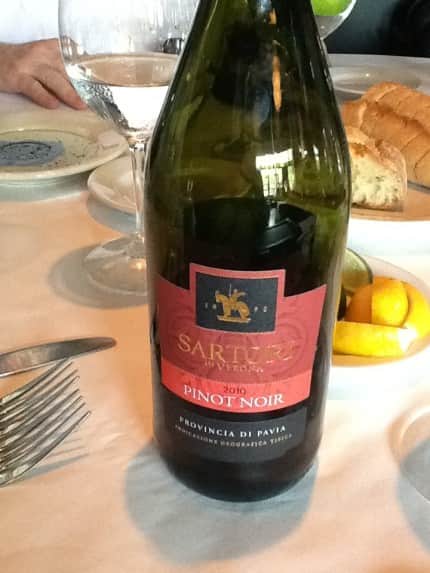 Our next wine was the 2010 Sartori di Verona Pinot Noir, a fun project the two men put together to see if they could make an Old World expression that would stand up to the classics.  It had the classic vegetal notes and pungency that makes up good pinot with notes of vanilla, black cherry, spice and pepper.  It is meant to make pinot accessible and for $11, this was a wonderful expression of affordable pinot noir.

We then moved to the 2009 Sartori di Verona Valpolicella, which had notes of earth, cherry and represented a classic version of this wine. 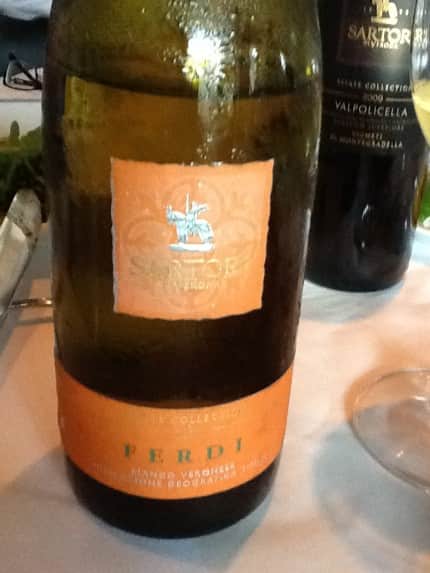 We then made the switch to a white wine – the 2010 Sartori di Verona Ferdi, which was a muscular white with elegance, power and notes of pear, apricot, lemon curd and lots of complexity. We actually came back to this wine after the full line of up big reds and it had lost nothing. And, for $14, it was a heck of a deal.

It was time for the big boys next. I have to point out that we were eating lunch at Terilli’s and Bernabei asked for some Parmesan cheese, which fell woefully short of Italian cheese standards. But we persevered on (making me really want to get some of the cheese they wanted me to have). The 2008 Sartori di Verona Regolo uses a technique of gentle pressing followed by skin maceration at low temperatures for 10 days. The wine then sits on Amarone pomace to enhance the aromatics and aging potential.  This results in a wine with great minerality and notes of berry and cherry. Great to drink today, but at $19, you should put some down and see what happens. 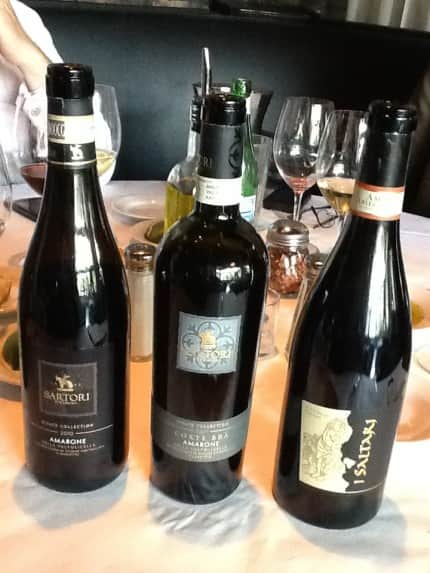 We moved to the 2010 Sartori di Verona Regolo, which had a great balance of black fruit and acidity. The Sartori Amarone 2010 had notes of wild fig, dates, terrior and was incredible. The “I Saltari” 2001 Le Vigne di Turano is a collaboration of the Colognola and Sartori wineries to improve viticulture, winemaking and production of Verona wines. The wines are aged in casks and slow racked to “bring the marriage together.” It was old world and had aged wonderfully with notes of spice and dried fruit.

A constant over the last 100 years is the Sartori family’s love of their land and heritage.  I look forward to continuing to watch the family’s evolution of their classical portfolio and evolution into what we consider non-traditional varietals of Italy.