Last week I wrote about the ‘House of Cab Dallas’ tasting that brought together 13 Stags Leap District vintners and owners to debut current releases.  As a bonus, I had the chance to sit down with Russ Weis, the general manager of Silverado Vineyards.

Russ has a mantra that I have no problem getting behind — wine is meant to be drunk.  We met to do exactly that at one of Dallas’ stalwart landmark restaurants, Al Biernat’s to drink some great Silverado Cabernet, eat some great protein (we continued to buck the system with fish) and learn all about the story of Silverado. 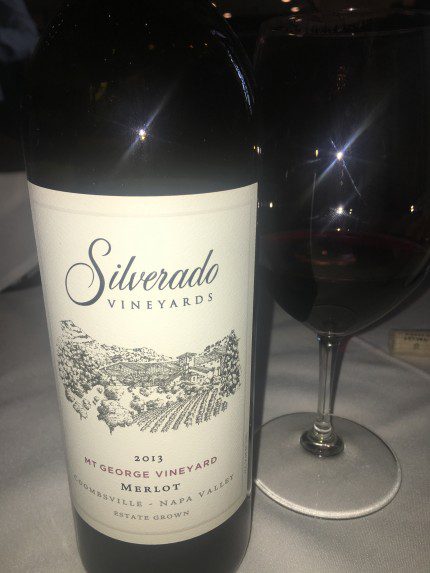 It happened to coincide with Russ’ 13-year anniversary of working for Ron and Diane Disney Miller (yup, that Disney family).  The Millers, who lived in Los Angeles, had pride in California and knew it had an ability to grow some good wine.  They traveled to Napa to see what the fuss was all about and fell in love with its beauty. They decided to start buying property in 1976.

One of the first three vineyards planted in the appellation was Cabernet. Silverado’s Stags Leap vineyard helped establish the reputation of the Stags Leap District.  It took some negotiating to convince Henry See from See’s Candy to sell his prized property, but the heart wants what the heart wants and they fell in love with this vineyard.  They knew they could do great things here.  First, they started with fruit before they decided to make wine with their first vintage in 1981.

Miller Ranch, in Yountville, which is ideal for growing Chardonnay, Sauvignon Blanc and Semillon, was the next to be acquired.  The family also owns the Mt. George Vineyard, the ancient volcanic site of one of the first grape plantings in the Napa Valley in the 19th century.  This vineyard is also marked by Napa Pioneer Henry Hagen’s weathered stone gate.  Other vineyards include Soda Creek Ranch, known for Sangiovese, Zinfandel and olive trees, and Firetree and Vineburg Vineyards, both known for Chardonnay.

Silverado is unique as it is one of the few wineries that grows, produces and bottles all wines directly on each of their estates.  So think of having complete control from growing the vines, to production to bottling.  As you hear Russ discuss everything from the artwork to the sales to the supply chain to the vineyard, it becomes clear that the family is heavily involved in the business in a roll up their sleeves type of way.

Russ summed it up, “to succeed, wines need to be delicious.  There are no second-class citizens at our estate.  All wine deserves craftsmanship at the highest level.”

“We have a phenomenal estate, the unity of the vineyards and the continuity of this land to make the best wines possible,” he continued.

That is part of who Russ is and the family that he grew up in.  He was born into a family of grape growers in Madera, California.  He grew up in vineyards working side by side with his father and grandfather.  This solidified his belief in hard work and rolling up his sleeves.  It also taught him the importance of what happens in the vineyard.  Even with that background, he tried to do something else and not only became a teacher when he graduated, but taught English at a liberal arts college in Japan.

He found his way back to Napa in the late 80s and worked at Christian Brothers Winery, Robert Mondavi and Silverado in marketing and business management roles.

He also talked about the responsibility he feels to help rebuild the valley during the aftermath of the fire.  Luckily, the Silverado wines, winery, vineyards and employees were not directly impacted by the blaze.

Russ told me in an email:

We are so pleased to be part of many years of fund raising at the Napa Valley Vintners.  During the earthquake, those funds allowed the NVV to create the Napa Valley Disaster Relief Fund which is administered by the Napa Valley Community Foundation.  (I was so honored to have a small role in this, since I was lucky enough to be the Chairman of the Vintners that year).  The Community Foundation reactivated the Fund the week of October 9 and the Vintners distributed $2.0 million to the fund on Thursday, October 12.  The foundation then made the first grants to community nonprofits the next day, totaling $565,000.  It is far and away the best way to help folks in Napa if your readers so wish.  Here’s the landing page of the disaster relief efforts:

And here’s the landing page to donate: 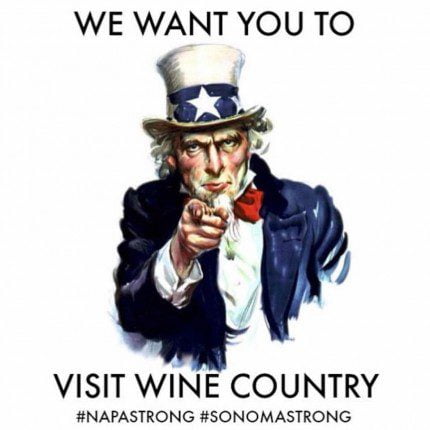 The best way you can help support Napa, Sonoma, Paso Robles and Mendocino is to visit the regions and/or buy wine directly from the wineries.  This is a region that needs our support.  The wineries, hotels and restaurants are open for business.  I can’t encourage you enough to show them you care with the power of your dollar.