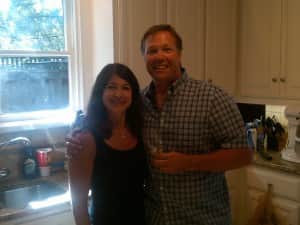 Those of you who remember last year when I had the wonderful opportunity to participate in my first Wine Bloggers Conference in Walla Walla, WA, I mentioned meeting Neil Cooper. Neil was working on opening his winery when I made my visit to Red Mountain with Margot. Fast forward almost 11 months and COOPER: A Red Mountain Winery is not only up and running, but has taken home a slew of awards and medals for its Bordeaux-style reds. Having taken on several states successfully, Neil set his sights on Texas and I was more than happy to host the Dallas stop on his Texas tour.

Neil originally followed in the footsteps of his father, a farmer, and began growing grass seed. But he always had a strong appreciation for wine due to his family’s close relationship with Bill Preston, wine maker for Fidelitas. While I was drinking Gallo blush in a big jug, he and fellow members of the St. Luis Obispo water skiing team, would pool their money and buy wine. When they didn’t have tournaments, they went tasting in different cities in California. Grass seed farming was lucrative, but Neil found himself getting stuck in corporate politics and began to think about the wine business.

Around the same time Neil and his partners – all who were not in the industry — were looking for a place on Red Mountain to make wine. After three years of negotiating, the winery that they desired was for sale and, Neil decided to make the plunge into running a winery including the operations, sales and building a brand from scratch. Long story short – with the wine being made today by Charlie Hoppes from Fidelitas – COOPER has some fantastic wines that provide a great value as compared to the Napa blends. He brought the full line up with him to Dallas, which gave me the chance to throw a party that coincidentally fell during the kick-off of my husband’s birthday week. 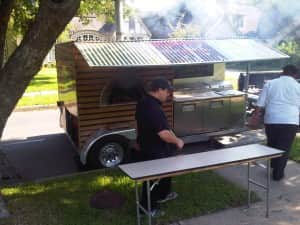 About 50 folks rolled up to find the Urban Crust pizza mobile kitchen in front of our casa and were treated to Neil’s fantastic wines. I loved that the top wines differed among so many of our guests, but what didn’t change was the universal agreement that we need these wines in Texas. Here’s the line-up: 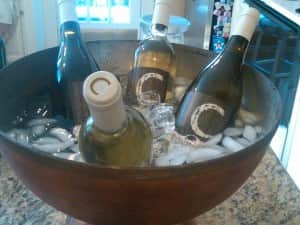 2008 Pinot Gris (Columbia Valley). This wine was crisp, bright and refreshing. I tasted tropical fruit and some floral hints. This is the first wine that I have ever heard my mom ask to have shipped to her and I totally understand why. Neil was sweet enough to let her have a bottle.

2009 COOPER Estate Chardonnay (Red Mountain). This is not your typical buttered toast bomb. It’s definitely an Old World style with butterscotch, pine nuts and a bit of lemon. There is lots of depth to this first estate wine. 2007 and 2008 Cooper L’inizio (Columbia Valley) L’inizio is a Bordeaux-style blend that showed spice, berry, tobacco, licorice and oak. While both were great wines, the 07 was my favorite as it was much more elegant with the gift of time. L’inizio means the beginning and is the cornerstone of the line-up and shows big notes of coffee, vanilla and cherry.

2008 COOPER Merlot (Columbia Valley) This is a very full bodied merlot with lots of berry. This one was the favorite of a good friend who is also a distributor in Dallas. I’d recommend some decanting time if you open it young. 2007 Cooper Cabernet Sauvignon (Columbia Valley) Dark fruit, cherry, spice and coffee made up this great tasting, full-bodied cabernet.

2007 COOPER Cabernet Sauvignon * Walla Walla Valley This is a big, complex, earthy cabernet. Lots of dark fruit and herbal essences like rosemary and even a little cardamom. Definitely one of my favs.

2008 COOPER Cabernet Sauvignon Hightower * Red Mountain This is the model for what Red Mountain Cabernet should be. Lots of tannins, minerality, cherry and a dry finish.

Cheers to l’inizio for COOPER wines in Texas and Neil Cooper, one heck of a great guy who followed his dream.