Stu Smith, the Enologist and Managing Partner for Smith-Madrone Winery, didn’t set out to own premium real estate valued for upwards of $400,000 an acre.  His goal was only to find a site in the mountains of Napa Valley versus the valley floor, to make the elegant, balanced, European-inspired wines he enjoyed.

During a Zoom conference with a group of wine writers, he talked about being young and ignorant in a time that Napa was just a small valley, cuisine was not gourmet and people of modest means could afford a winery.  “I lament that today you have to be in the upper percentile to even think about having an operation here,” he said.  “That was not the case 49 years ago.”

Smith-Madrone was once a working vineyard in the 1880s, but it was abandoned and became absorbed by the forest land.  The 200-acre property on Spring Mountain was named after its predominant tree, the red-trunked Madrone.  At the time, the Valley had less than 30 wineries. 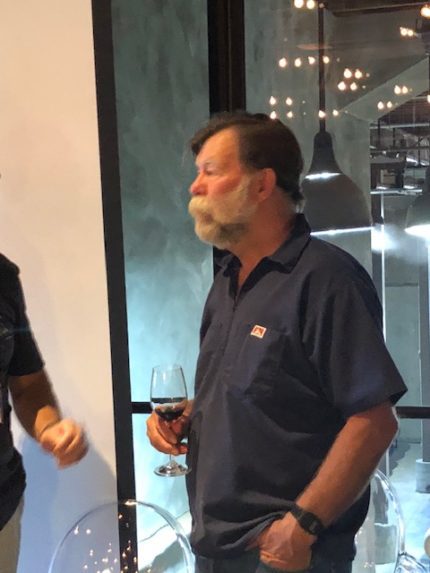 Stu at #wwet in Napa

It’s a family business.  Stu is joined by his brother, Charles who is the winemaker and Stu’s son Sam, who is assistant winemaker.  In 1972, they planted five acres each of Cabernet Sauvignon, Pinot Noir, Chardonnay and Riesling.  The varietals are all still grown, but Pinot Noir, which never fully lived up to the brothers’ expectations and Cabernet France, Merlot and Petit Verdot have been added.  In 1974, Stu and Charles literally built the winery by hand using over a million board feet of wood.

In 1977, their first Riesling was recognized as the ‘Best Riesling in the World’ in 1979 at an international competition sponsored by Gault-Millau.  French oak is used in winemaking except for Riesling.  Oak comes from the forests of Tronçais, Nevers and Allier because the oak influence is less obvious in the wine due to how it’s grown.

Stu talked to us about the difficulty of farming in the mountains.  “Mountain viticulture is just a lot of work and there’s no easy way of doing it.”  But, for almost 50 years not only do they continue to make wines that are unique to the area and are some of the greatest values in the Valley.

We went through a variety of wines, which included Smith-Madrone Riesling, a wine that was the standout during a Napa Wine Writers Educational Tours Conference in a sea of great Napa reds.

2016 Smith-Madrone Riesling, Spring Mountain District, Napa Valley – It was the 2006 that originally turned my head, but this one was also a standout Riesling.  It was dry and had a great minerality with notes of apricot, citrus, green apple and petrol.

2015 Smith-Madrone Cabernet Sauvignon, Spring Mountain District, Napa Valley — a great value for a Napa Cabernet Sauvignon at this caliber for $52.  This was a complex wine with black fruit, tobacco, chocolate and herbal notes.

2016 Smith-Madrone Cook’s Flat Reserve, Spring Mountain District, Napa Valley — The Cook’s Flat Reserve represents the best barrels from the best lots and is made in certain vintages.  It reflects the heritage of the first winery on the property — Cook’s Flat was the name used by locals for the vineyard planted by George Cook.  This was elegant and nuanced with blackberry, black cherry, raspberry, tobacco, spice and earth.  At $225, it is a special occasion wine, but worth it.

In talking with Stu and tasting these wines, the word that comes to mind is authentic.  As Stu put it, “Mother nature is our stamp and with her comes balance, complexity and elegance that reflects the terroir.  Our goal is play in the dirt and make affordable wines that encourage discussion and make the world flow away.”