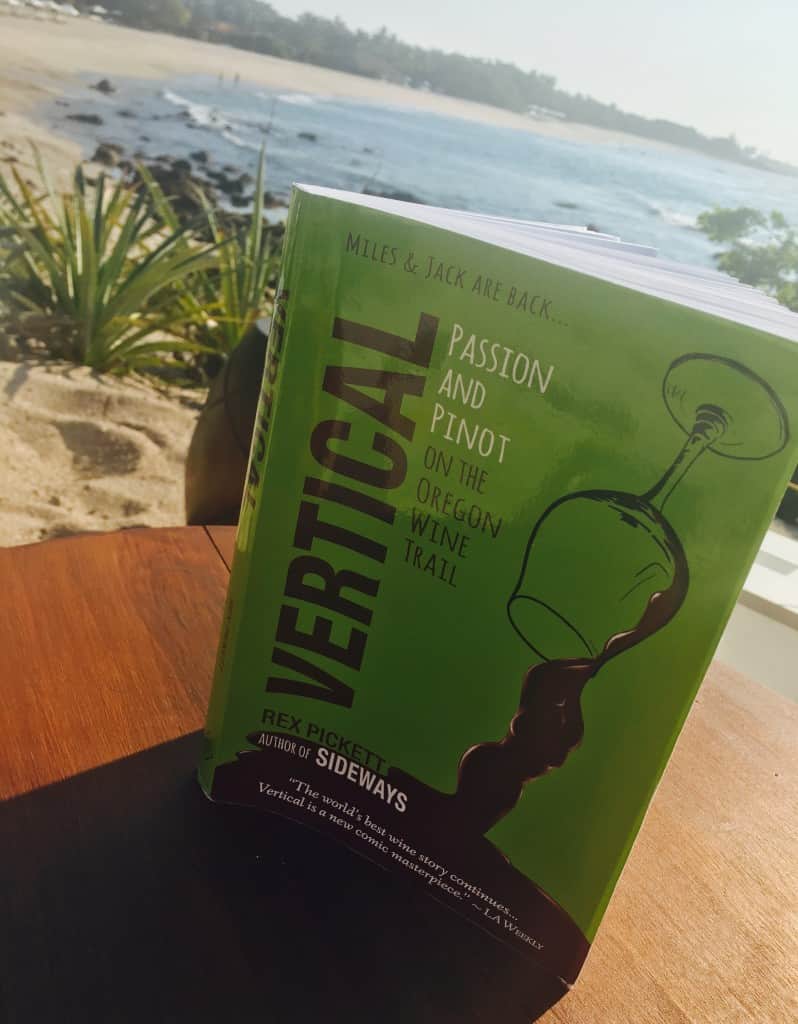 For those of you who read Sideways by Rex Pickett, the book that almost single handedly changed consumers’ willingness to drink Merlot, you remember the premise.  Two good friends, Miles and Jack, go on a last hurrah trip the week before Jack is to marry in the Santa Ynez wine country.  Jack is facing the life change of marriage and Miles is facing the life change of divorce as well as the instability of his career and not knowing his place in the world.

The book started a movement – of pinot, of pilgrimage to the places featured in the movie and showcased the love of wine from two not so likeable wild and crazy kind of guys.  The book focuses on relationships – friendship, wine and relationships – and exposes the flaws in all.  Rex has now written his second book, Vertical, which tells the next journey for these two men.

Fast forward seven years and the tables have turned.  Jack is a divorced, down on his luck alcoholic who has definitely lived his glory days.  Miles is now a successful author with a movie that has become a blockbuster.  He is now the celebrity.  But his life is far from perfect.  He is spiraling into a cycle of drinking, depression and self depreciation.  But the speaking gigs keep happening, the wine keeps pouring and even after he publicly drinks the spit bucket at a tasting (with no recollection), he continues the downward spiral.

His mom, Phyllis, has suffered a stroke that has left her incapacitated and stuck in an assisted living home – and frequently tells Miles how miserable she is.  He knows she wants to go live with her sister in Wisconsin and he finally has a way to get her there.  Since she is wheelchair bound and Miles is deathly afraid of flying, he decides to engage Jack to help drive her from the assisted living home in Carlsbad to Wisconsin by dangling $10,000 and a trip to the International Pinot Noir festival in Oregon.

It’s funny – insert a pot-smoking caretaker, a dunking machine, a Viagra mishap and lots of other laugh out loud moments – and you can see this is the next successful screenplay.

It’s poignant – anyone who has had to deal with the loss of a parent, watching a friend go down a dark path, dealing with alcoholism or making bad decisions leading to the loss of someone you loved – will see this is more than two wild and crazy guys on a last rampage.

It’s a great snapshot of the Willamette Valley – the wineries, the people, the tasting rooms, the scenery and the new pilgrimages that will begin because of this book.

And, finally, it’s an introspective by Rex.  I only met him once briefly at the Wine Bloggers Conference, but you can see the self depreciation, the fear of losing the success and when you hear him talk about what he wished he had known prior to the movie, you get those flashes of the fears that Miles has.  He’s a great writer who brings the people, pinots and pathways truly to life.

3 thoughts on “Rex Pickett’s Next Journey: Vertical, The Next Chapter of Miles and Jack”