I have been way too quiet lately and I broke my cardinal rule last week to blog at least once a week. Therefore, I owe you an apology, but I hope you understand. Last week I left my longest job to date where I had worked for six and a half years at one of the largest global public relations firms. I had this amazing opportunity – to go back to the client side and become the chief marketing officer of an enterprise software firm based in Sweden. No, I’m not moving, but it is going to be a definite career challenge. And, so clearly I’m excited. But distraction set in and while I drank a lot of celebratory wine, I just wanted to be a normal consumer for a change.

When I was invited to a TasteLive event featuring Freixenet and Gloria Ferrer sparkling wines, my need to celebrate took over. We were supposed to pair these with cheese, but I was in diet mode so I decided to use Mediterranean food, which paired ridiculously well. 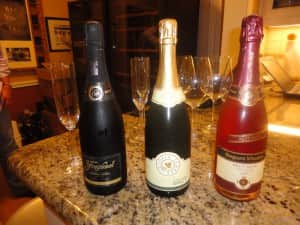 Our group of four started with the Freixenet Cordon Negro Cava, which we universally agreed was a good budget, easy drinking sparkler. It was nice on its own with apple, pear and citrus flavors, but it was almost begging for fresh squeezed orange juice.

The Gloria Ferrer Sonoma Brut tasted of brown toast, citrus, green apple and had a nice minerality to it. It was described by one of my group as the one that she would drink for the evening because it was the most interesting and had some depth.

The Segura Viudas Brut Rose Cava, which is always a sparkling stand-by at my parties, was fruity with notes of raspberry and cherry. It paired perfectly with the hummus. I really like this wine and think it is a fabulous value for the price.

In a month where celebrations abound, pick up some sparkling that will be easy on your palate and wallet.

4 thoughts on “Freixenet and Ferrer Sparkling for the Holidays”