I’ve gotten to know Galen Struwe from Sacre Bleu Wines through Twitter.  A few months ago he called me with victory in his voice to let me know something really big was coming to Texas.  Galen had discovered some really good Chilean juice from the Maule Valley – Sauvignon Blanc and Cabernet Sauvignon – and was bottling his wine to debut in Central Market, a high end grocery store chain with several stores in Texas.  He asked me if I’d be willing to taste and review the wines.  I told him of course I was happy to do so.

And then I waited.  And waited.  Life moved on and it was a busy summer.  Finally an unmarked, unbranded box arrived at my office with a bottle of Cabernet and a bottle of Sauvignon Blanc.  I put them in our Eurocave and was on the road for the paying gig so it took me a few weeks to open the first wine.  My husband and I tried the Sauvignon Blanc first. 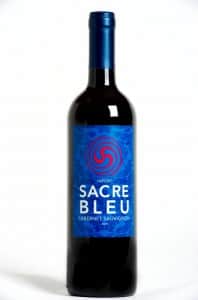 It was crisp with grapefruit and nice acidity.  My husband was pretty shocked to discover the $9.99 price tag and asked that we pick up more at Central Market because it really is a good summer wine.  We didn’t try the Cabernet for another 30 days (also priced at $9.99).   When we  did opened that bottle, we found our next pizza or party wine.  I tasted currant, cherry and a little mint on the nose.  There was a little of a jolly rancher finish, but it was a great wine for entertaining a large crowd.

After talking to Galen and getting the go ahead that the wines were in the stores, I went on my own journey to find them this past weekend.  After getting a blank stare from the Central Market designated foodie in the wine department and being told the wines were not there, I reached out to Galen.  Apparently, Texas’ antiquated tiered distribution system reared its ugly head.  The wine is still not in Central Market stores, but I’d recommend seeking it out when it debuts – after all, you always need a new pizza or pool wine.