Kaiken: An Authentic Approach to Wine and Terroir 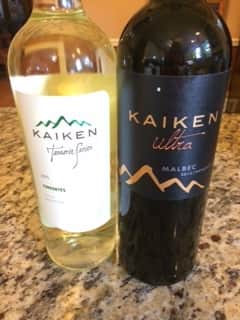 Authenticity in marketing and brand. It’s talked about often, but at the end of the day, most companies do not practice what they preach. I was asked by PROTOCOL wine studio to be part of its online twitter-based educational program designed to engage brains and palates.  This month featured Viña Montes and Aurelio Montes, who holds the title “Guardian of the Spirit” at the wine conglomerate – usurping any usual corporate role, especially at a winery that ships more than 1 million cases per year.

In 2001, Aurelio Montes, the senior winemaker and founding partner of Viña Montes in Chile, visited Mendoza in Argentina and saw the potential of these wines.  Kaiken was founded in 2002.  In 2007, Aurelio Montes Jr. joined the winemaking team as the Enological Director in the Apalta facility.  He was there for four years and was responsible for developing new wines and studying the terroir.  In 2011, Aurelio moved his family to Mendoza, Argentina, to manage the Kaiken project.

First, a little about Kaiken.  The winery was built in 1920 in the district of Vistalba, Mendoza by Italo Calise and acquired by Kaiken in 2007.  Kaiken currently owns three vineyards of the highest quality in different terroirs, accounting for fifty percent of production.  Kaiken was named after Caiquenes, the wild geese, who fly over Patagona between Argentina and Chile.  The name is symbolic – combining the great attributes of both Chilean and Argentinian wines.

In terms of authenticity, Aurelio Jr strongly believes that it is time to start describing wines by region vs varieties.  This brings up the importance of terrior and puts a strong focus on the winery to educate the consumers, which usually translates into big dollars.  I absolutely respect that and Aurelio said,” it’s the energy of nature to express the terrior, so to me, it makes sense.”

Last night’s tasting featured two Kaiken wines from Argentina. The Kaiken 2012 Ultra Malbec has been on my list of “the top 5 under $20 value reds” for ages.  It had notes of plum, blueberry, herbs, violets, spice, bittersweet chocolate and clove. It was delicious.

We also tried the Kaiken 2014 Terroir Series Torrontes, which had notes of peaches, white flowers mainly jasmine, tropical fruit, orange blossom and was really nice and different than the usual Torrontes that I’ve tried before.