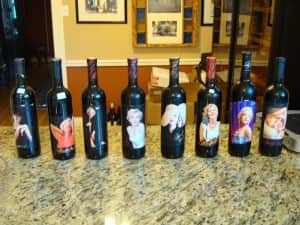 I’m not quite sure how it started or why I picked up that first bottle of Marilyn Merlot wine back in the 90’s.  What started as an impulse buy somehow grew to a collection that ranged for ten years.  When I dug through the cellar recently, I realized that I had acquired eight vintages (not sure what happened to 98 or 01) with duplicate bottles of some years.  After much prodding from my husband to clear some wine cellar space and realizing I had a few hundred dollars of sunk cost in this particular wine, I decided to host a vertical tasting for my friends.

The Marilyn wines begain in 1981, when a small group of Napa friends started making wine at their home in the Napa Valley. One evening in 1983, over dinner and a bottle of homemade wine, the “Marilyn Merlot” concept was born and the wines went on sale to the public in 1985.

Other than wine and art, I am not a collector (my husband would disagree and add expensive shoes to the list).  No Hummel’s or figurines or themed knick knacks adorn my home. So, while I had no idea why I had started this particular collection, I was hopeful that a wine between $19 and $30 a bottle would be decent and it would be fun to taste the evolution. 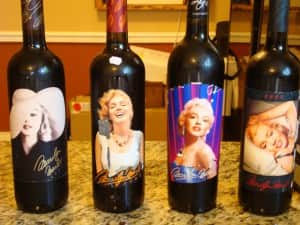 So five of us gathered with some anticipation and began to taste.  I planned to do tasting notes for the eight bottles that we tried beginning with 96.  The wines were uniformly described in online reviews as tasting of chocolate, raspberries and blueberries and having an almost velvety mouth feel.  That wasn’t our experience with a single bottle. In fact, most were undrinkable.  Of the eight that we tasted, only the 97 was interesting enough to take another sip.  It was just not good and I had two bottles of two different vintages that were both corked.

Now I could blame a few moves for the earlier bottle disappointment, but I’ve had proper Eurocave storage units since 2000, so I no excuse for the later vintages.  My final tasting note after having the 04 and 05 was one simple word – no.  Marilyn Monroe once said, “I think that when you are famous every weakness is exaggerated.  Or, in my words, sometimes you can’t stand on celebrity.

So, a lesson was learned by me that day.  Just say no to trendy collections.  Do not buy wine affiliated with a celebrity unless you have personally validated it.  And, the overall reality that I could have acquired a great Napa cabernet, a bottle of fine Italian wine or even a vintage second growth Bordeaux for the cost of ten bottles of Marilyn made me realize there would be no more meaningless relationships with celebrity wines in my future.

92 thoughts on “A Decade of Marilyn Merlot Wine: A Collectible Experience”