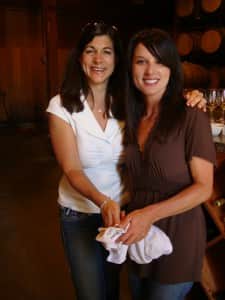 Our last stop in Napa was to see one of my favorite people and a wonderful  wine hostess, Jacquelyn St. Martin at Barnett Vineyards.  I had the opportunity to meet Jackie, recovering Texan, last year at a wine dinner in Dallas and we immediately clicked.  For years, I have always joked about my “Fred Flintstone thumbs” and hers are identical (hence the photo and trust me – this is a freak of nature thing).  Barnett is always at the top of my wine country list.  I love their wine, but it’s even more fun when they are in wood burning pizza making mode as the pairing is sublime.   Looking down Spring Mountain with a glass of wine in hand is just a majestic experience.

Fiona and Hal Barnett launched the winery in 1983 with a focus on producing Cabernet Sauvignon wines, but have expanded to include Sauvignon Blanc, Chardonnay, Pinot Noir and Merlot with grapes taken from other single vineyards.  Because of the nature of the Spring Mountain terroir, the grapes are harvested by hand.

We started with one of my favorites Barnett whites – the 09 Sauvignon Blanc, which had just been released that week and harkens from Dry Creek Valley.  At $25, I loved the crispness and tasted citrus, herbal and tropical fruit flavors.  I adore this wine.  Our next glass was the 07 Savoy Chardonnay priced at $35.  It was made in the Bordeaux style.  I tasted citrus, floral notes and a little vanilla.  They were totally sold out of the Tina Marie Pinot, so we tried the 08 Viento Valle Pinot Noir instead.   Our group almost collectively brought home two cases of this wine, which is priced at $45.  Big cherry, a touch of sweetness and some earthiness.

We then tried the 07 Merlot, which was described by one of my travel companions as “the soup that drinks like a meal.”  It’s a deep purple color with lots of stone fruit, earthiness and licorice.  Priced at $48, it is a great wine and one that should be tried with food.  We then tried three different Cabernet Sauvignon wines.  First up was the 07 Spring Mountain District Cabernet Sauvignon, which was a good Cab, priced at $65.  We also tried the Cyrus Ryan Cabernet, which was very nice, but the 07 Rattlesnake Hill Cabernet brought the group to our knees (in a good way).  It’s a special occasion wine at $125, but its dark color, deep fruit and complexity, made it the favorite wine with the group.  There is some urgency to getting this wine.  When we were there, only ten cases remained and we probably cleared out two of them. 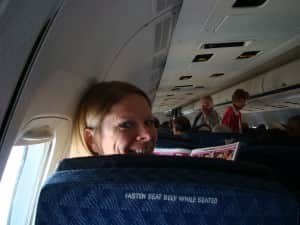 Lora waiting on the plan

After a wonderful time at Barnett and a great dinner at Redd, we ventured back to the hotel to get ready for our return.  The drive to Sacramento was uneventful and then we jinxed it with the comment that this had been such an easy trip.  Wrong!  Due to some weather in Dallas, we ended up diverted to Oklahoma City for a few hours.  Only one of our team had upgraded to First Class and when she came sashaying back with her Bailey’s as we were pooling the snacks at the bottom of our purses, we were kind enough to not do her harm.  We finally arrived back home about four hours later than we originally planned and I was realizing the return to reality might not be as easy as I had hoped.