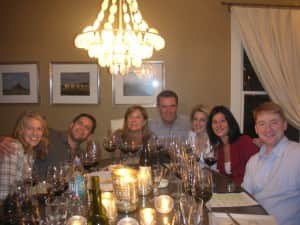 On Saturday night, my husband and I gathered with some of my favorite people for our bi-monthly wine club. The theme was wines that were rated over 90 points and cost under $30. We started out with an impressive display of gourmet cheese, hummus, breads, pates and prosciutto as well as two starter (or as we call them, swill) wines. The first was an 07 Olivares Altos de la Hoya. This Spanish wine was rated 91 points and well priced at $11.99. The second, was the Signargues La Font due Vent Cotes du Rhone 06, which was rated 91 points and priced at $14.99. I personally enjoyed both of them, but the Rhone seemed to be the clear winner among the group, especially after it had a chance to open up.

Then the games began. Flight one was comprised of six wines beginning with the Pazo Senorans Albarino 06 from Spain. I found it fruity, but with some minerality that kept it from being cloying. It was rated a 92 and priced at $27 (29 cents per point). The second wine was the Tablas Creek “Cotes de Tablas Blanc.” I tasted guava, peach and apricot and likened it to the drink “Sex on the Beach.” It was rated 92 points and priced at $23 (25 cents per point). The third wine, a Melville Estate Viognier, had an essence of peach, apricot, orange blossom and floral tones. It was rated 90 points and priced at $22 (24 cents a point). Around this time, smoked salmon and trout on polenta was served to the table with a lovely crème fraiche. It paired nicely with the whites served. But, this group generally prefers reds, so we made the switch on wine number four – the 08 Borsao Tres Picos Grenache with big flavors of blackberry and liquorce had a nice balance. Priced at $18 (20 cents per point) and rated 91, it was one of my favorites from the first flight. Wine number five was the 07 Descendientes de Jose Palcios Petalos from Spain. Full of raspberry, blackberry and smoke, the wine was rated 91 points and is priced at $22 (24 cents a point). The final wine of this flight was the 05 Capcanes Mas Donis rhone blend from Spain. The cherry, blackberry, liquorice and herbs made this the most interesting of the flight. Priced at $16 (18 cents per point), this wine is rated 91 points making it the best value of the flight and another favorite.

At the intersection between the first and second flight of wines, I find that the conversation usually splinters off from class into sass. Because I’d like to not be tossed out of the group, I won’t go into details here, but the conversation is always fast, furious, fun and many times, inappropriate.

At this point, a savory beef stew was served to begin the second flight of wines. The first, a Luigi Bosca Reserve Malbec tasted earthy with blackberry and espresso essences. At $20 and 90 points (22 cents per point), it fulfilled what a Malbec should be. The second wine was the 07 Clos de los Siete Super Red Blend. I tasted black currant, hints of oak and black cherry. Priced at $20 and rated a 91 (22 cents per point), it was a nice wine. The third wine was one of the hidden zingers that didn’t fit the criteria for wine club because that’s the way we roll. The 05 L’Aventure Estate Cuvee tasted of currant, liquorce, chocolate and spice. And, at $75 (and 77 cents per point), it was rated a 97. I liked this much more until I found out the price. The fourth wine was a 07 First Class Shiraz from South Australia. I tasted chocolate, berry and smelled a hint of bacon. Priced at $28 (31 cents per point) and rated a 90, it was one of my favorites. The fifth wine was aptly named the 07 Suxx Shiraz. In my opinion, it is an appropriate name. It was priced at $24 and rated 91 points (26 cents per point). The final wine was also a favorite – even after finding out it too was a zinger. The 04 Domaine Santa Duc Gigondas Cuvee Prestige. Full of black cherry, liquorce, pepper and currant.. It was priced at $57 and rated 94 points (61 cents per point).

Usually, at the end of a tasting, we choose one wine that the group will purchase to drink at the end of year party. However, due to a few pregnancies of core group members (not those attending this evening) and the inability to agree upon one favorite, we changed the plan. While this group knows a great deal about wine, we all have different palates and taste preferences. It’s a good reminder to me that the best wine out there is one that you enjoy – no matter what the critics say.

4 thoughts on “Wines Rated Over 90 and Under $30 Wine Club: The Intersection of Class and Sass”