Many of you know that I recently took a marketing role at an international company based in Stockholm which requires that I spend at least once a month on the road.  While this sounds fabulous and glamorous, it usually ends up being planes, taxis, conference rooms, airports, little sleep and interesting dinners – some good, some really bad.

It’s rare that I get to take in the local sites – let alone the local wine bars, but this trip proved to be an exception.  It also turned into quite the adventure – from bomb threats at the airport in Amsterdam to a sad Cupid trying to buck tradition in Valentine’s Day apathetic Stockholm.

After finding out that British Airways had Tattinger by the glass, I happily accepted a few glasses on my DFW to London leg of the trip.  However, while the flight attendant on the London to Amsterdam flight tried very hard to convince me to have champagne, it was only 8:30 a.m., and even I have my standards.  I was very thankful that he convinced me to take the split of Pommery to drink at a later time. 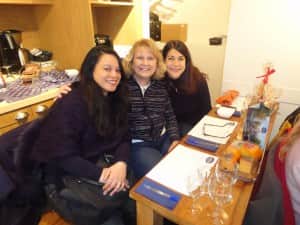 We landed in cold and snow in Amsterdam and were greeted by our tour guide and colleague, Rose, who had set up a wine and cheese tasting of a well-known, Holland-based cheese maker, Reypenear.  We had two very drinkable French wines – a La Croisade Viognier and a Syrah that were nicely priced around $12 a bottle and port that rocked with the cheese.

After touring the heart-breaking Anne Frank museum, we went to a wine bar named Wine & Bubbles that had fabulous flights.  Our group sampled bubbles, French and Italian flights and everyone was very happy.  There was a great line-up of very fun wines and a cool atmosphere.  That’s where the culture ended and a very interesting night out begin.  Let’s just say that seeing the various sites of Amsterdam is very different by night than by day. 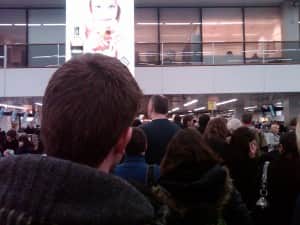 After the meetings, I headed to the Amsterdam Airport just a few hours after the bomb threat happened.  Security, chaos, lines that were more than two hours long and lots of very angry people that had no chance of making their flights.  Thankfully, the two million miles that I have on American/British Airways served me well and I found a frequent flyer line that only took 45 minutes.  And then I discovered the wheel of wine in the lounge.

Fast forward to the Stockholm portion of the trip that happened to take place over Valentine’s Day.  Stockholm is not as “Hallmarked” as we are in the U.S. and I saw no flower deliveries of general giddiness at the office during the day.  However, as I ate dinner in the hotel, I did see a little guy with a bouquet of roses waiting and waiting and waiting for his date.  Sadly, she never showed.  I hope she met him elsewhere. 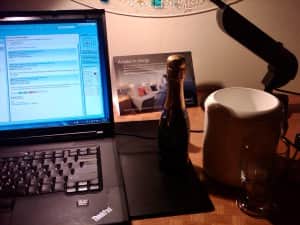 My Valentine’s night included lots of work emails and a very hearty battle with the aforementioned split of champagne that refused to open.  However, there is nothing that stands between me and champagne and I’m happy to say that I triumphed.

My trip ended with a child seated in business class who cried for nine hours straight.  This time, glasses of Tattinger, Bose headsets and a string of movies kept me sane.

2 thoughts on “Wine-ing Through Europe”