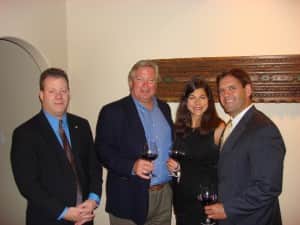 I had the opportunity to attend yet another wonderful wine dinner that Lakewood Country Club hosted for its wine locker members.  Co-owner Gary Luchtel from Surh Luchtel joined us for a wonderful four course dinner prepared by Executive Chef William Koval.  Poor Gary drew the short straw and ended up seated next to me.  For the next three hours, I proceeded to pepper the poor guy with questions that he handled with incredible patience and good humor.

A small town Iowa boy who followed an attractive exchange student to California, Gary told me his story about the wine hobby he and Don Suhr shared that began in 1990 and became a career in 1999.  I always am intrigued when I see people who have made their passion a success.  However, Don gave me a new perspective when he stated, “you know you lose your hobby when it becomes your job.”  Hmmm.

Suhr Luctel has grown and now  produces 4,000 cases of ten wines – Pinots, Bordeaux varietals, Cabernet, Zinfandel and Viognier.  He and Don serve as the only two employees of the winery and their focus is on making good wines at even better prices. While they source grapes from high-end growers all over California, they also own Fortanati Vineyard, which produced the Viognier that has become a new favorite of mine.  More on that to come later.

During the cocktail hour, we sampled the 07 Surh Luchtel Pinot Noir from the Sonoma Coast.  Cherries, spice and earthiness in a glass that retails for $32.  The other wine served was the 06 Surh Luchtel Mosiaque.  This wine priced at $31 was a Bordeaux blend with lots of blackberry and stone fruit.   I’d like to try this wine in a few years as I feel age would make it very different than it is today.  These two wines were paired with passed appetizers of mini crab cakes with tomato jam and lobster sauce; black peppered beef, arugula and parmesan and pork shumi with karashi mustard.  The appetizers and wine matched well.

Our first course was a soup of spring green garlic cream with fresh peas, morels and seared rabbit loin.  This was served with the 08 Surh Luchtel Viognier from Oak Knoll in Napa.  An unlikely pairing in my mind, but I can’t find my way around a kitchen.  It was a fantastic match.  The wine is my new favorite Viognier.  It is produced in stainless steel barrels, but after the primary fermentation, they add a partial malolactic fermentation to bring out the creaminess of the wine.  The combination of the minerality, crispness, apricot, white peaches and pepper make it one of my top new summer wines and it is a great find for $28.

The next course was a seared long island duck breast with a Japanese sweet potato, cardamom, mango, shitake served with star anise duck sauce.  This was served with the 06 Surh Luchtel’s Gary’s Vineyard Pinot Noir from Santa Lucia Highlands.   This was a very expressive and big Pinot with a taste of berries and cherries.  It was a wonderful match with the course.  It is priced at $50.

Our dessert course was served with the 05 Surh Luchtel Stagecoach Vineyard Cabernet Sauvignon from Napa.  The fresh fruit almond cream pastry and pistachio almond ice cream – especially the ice cream – worked well with the Cabernet.  This was also a big wine with blackberry, cherry, currant and hints of chocolate.  Priced at $40, this wine would evolve for another 5-7 years with cellar age.  The bonus of the night was the glass of 63 Taylors Port that Clubhouse Manager Tony Zaranti poured at the end.  It topped off a great evening of fun, friends, food and wine.