I recently participated in the Summer Wines of Virginia Taste and Tweet that consisted of a group of twelve bloggers who will be attending the Wine Bloggers Conference in Virginia in July.  Like usual, I invited over my group of good girlfriends who happily opened their palates to a new experience.  And, they came bearing food in overwhelming quantities.

I did some research and according to Virginia’s Department of Agriculture, the state ranks number eight nationally in commercial grape production and eighth for bearing acreage.  However, I’m from Texas and while we are making better wines than in the past, what was important to me was the taste. 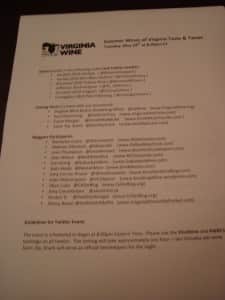 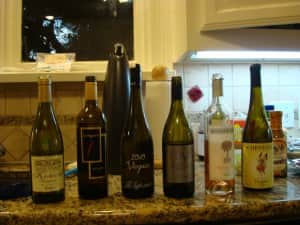 We tasted six white wines – all pretty well priced in nature and all new to me.  We started with the 2010 Keswick Vineyards Verdejo, a light, crisp summer wine that tasted of citrus and green apple with a hint of floral.  It was nice, but seemed a little overpriced for an everyday wine at $20.

The second wine was the 2010 Veritas Sauvignon Blanc Reserve. If I tasted this blind, I would have guessed New Zealand Sauvignon Blanc.  I really liked this wine and it had some structure, but with a New World style with grapefruit, grassiness and lemon.  It’s a natural with oysters.

The third wine was a rose.  You guys know that I have a hard time personally with roses unless they sparkle, so I definitely let the guests provide the more objective review.  The 2010 Boxwood Winery Topiary Rose, was described as “dusty strawberry” in taste – a mix of strawberries and minerality – and is priced at $14.

We then shifted to the 2010 Jefferson Vineyards Viognier, which was rated very highly by other bloggers in the tasting.  Unfortunately, my bottle was corked, so I look forward to trying the wine at WBC in July.  This is priced at $25. 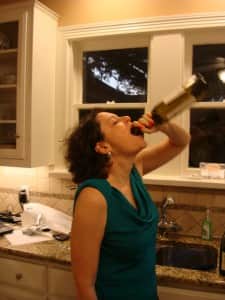 An unnamed guest with a good sense of humor

The fifth wine was the 2010 Chrysalis Viogner, which was definitely the favorite of my group’s tasting.   This wine was almost creamy with layers of pineapple and citrus along with some minerality.  This was priced at $29.

The final wine was the 2010 Lovingston Petit Manseng.  Priced just under $17, it was my first experience with petit manseng.  And possibly my last.