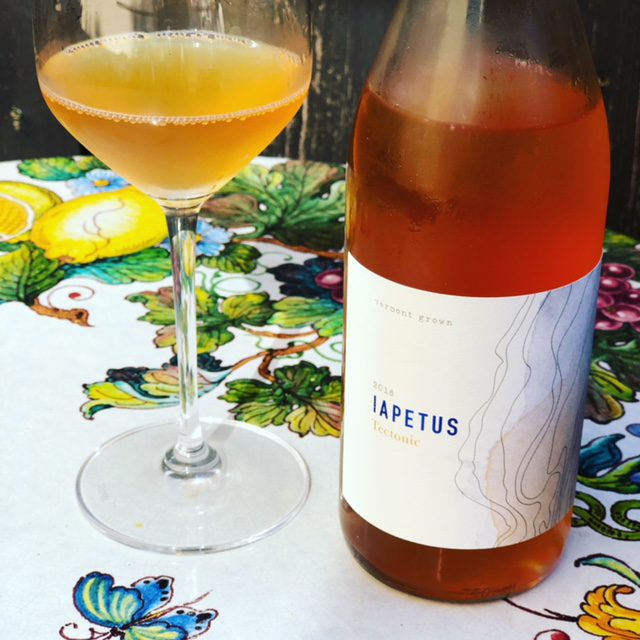 One thing that I appreciate about the #winestudio program is that it brings a wide variety of wines into my home from regions that I’d never get to sample.  This time it was orange wine from the state of Vermont with Ethan Joseph, the winegrower from Iapetus, a small producer of wines.  The wine came unfiltered and a very bright orange, so I was intrigued about what we were going to taste.

Iapetus is the name of an ancient ocean that once covered what is now the Champlain Valley.  Ethan told us that he chose the symbolic name of “Iapetus” as part of a story that is millions of years old, but it connects the wine of the past to the future. I loved how he talked about his view of the shift of time, what brought him to the region.  “We aim to craft our product and farm in a way that acknowledges the broad history written into the earth from which we work”, claims Ethan.

They began their production in 2016 with about 500 cases and have expanded annually.   All of the wines are natural, spontaneously fermented and unfiltered.

As much as Ethan pushes the limits, he has no formal or family background in farming, grape growing, winemaking, or wine drinking.  His wine drinking roots began humbly with a jug of Carlo Rossi.  He began working part-time for Shelburne Vineyard while studying natural resources at the University of Vermont, while he learned home brewing and fermenting vegetables he grew in his community garden plot.

In early 2008, he had the chance to work full-time at Shelburne Vineyard and his love affair with wine began. Ten years later, Iapetus was born where Ethan had the chance to tell his story of wine, one which began hundreds of millions of years ago with no end in sight.  He described it as “a story of transformation and being open to changes, transitions, and shifts both in our physical efforts with grapes and wine, but also in our philosophical and intellectual endeavors with the two as well.”

Iapetus will serve as an evolution in the continued learning, developing, and appreciating of winegrowing in Vermont, which started in 1997 and now totals 13 producers with Shelburne Vineyards being the largest grape producer.

The fantastic orange wine that I mentioned was the 2016 Iapetus Tectonicwine.  It is made of 100% la crescent grapes and spends 50 days macerating with the skins.  Fermentation and maceration occurs in stainless steel and then it spends 8 months aging in the barrel.

I tasted citrus, minerality, spice, floral notes and some herbal notes.  This was my first Vermont wine and I never expected that it would be an orange one and would have the complexity that it did.  I’m intrigued to try more wines from Vermont and Iapetus, especially the sparkling ones that I noted on their website.