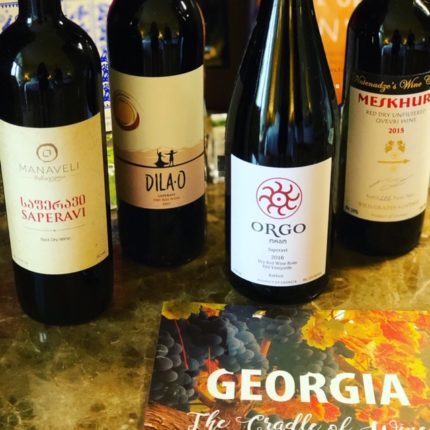 There once was a debate on the origin of wine.  At the end of last year it was finally determined by scientists that 8,000-year-old pottery fragments have revealed the earliest evidence of grape wine-making from Georgia vs. Iran.  The jars found had images of grape clusters and a man dancing.  The study was published in the Proceedings of the National Academy of Sciences (PNAS). 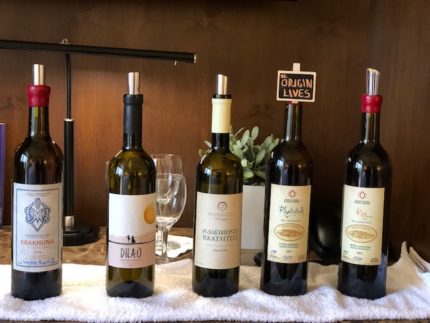 I first had the chance to taste Georgian wines at TEXSOM, the premier wine and beverage education conference for sommeliers and wine professionals in North America.  Georgia is known for the fertile valleys and slopes of the Transcauscasia and has more than 525 varietals.  It is a culture where family wine is more deeply embedded than any country in the world.  That stat was given to me by my host, Julie Peterson, who heads Marq Energie Marketing Agency, which was contracted by Georgia’s National Wine Agency to promote Georgian Wine.  During our discussion and tasting session, she told me that there were more than 100,000 home wine makers (mostly families) in addition to the established wineries in Georgia making wine.  It’s clearly a way of life where wineries are now reinvesting and rebalancing old traditions and new winemaking methods.

Among the best-known wine regions are Kakheti, divided into Telavi and Kvareli; Kartli; Imereti; Racha-Lechkhumi and Kvemo Svaneti, Adjara and Abkhazia.

I was impressed with the wines that I tried that were in a style new to me (see above for my varied and diverse red and white line-up), but that started my intrigue with the Middle East that was further stoked with my #winestudio conversation with Jason Bajalia from Terra Sancta Trading Company. 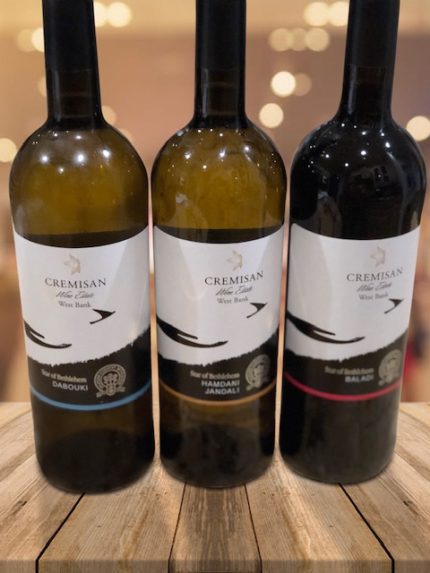 In our month together, Jason started the conversation by eloquently saying, “No-doubt everyone has their own perception of the Middle East; but politics aside, through Terra Sancta I not only want to introduce the products to the U.S., but also help people understand the importance of the Levant [Eastern Mediterranean] today.  Not a lot of people realize this is where wine originally came from.  It’s where beer came from.  The role this part of the world has played in shaping the beverage industry as we know it today is grossly underestimated.”

His love for the Levant region came from having dinner and ordering the local wine.  That encouraged him to start Terra Sancta Trading Company to share those West Bank wines, beer and spirts from the Holy Land with people in the United States.  For Jason, it’s about unification — food and wine brings people together regardless of politics.

Jason was born in Palestine and was raised in San Francisco. Terra Sancta Trading is a family-owned business founded in Jacksonville, Florida,

Let’s talk a little about the Levant Region – it refers to a large area in the Eastern Mediterranean in the region immediately bordering the eastern Mediterranean Sea: Cyprus, Israel, Jordan, Lebanon, Palestine, and Syria.  The largest cities are Damascus; Amman; Aleppo; Baghdad; Beirut; Gaza; Jerusalem and Tel Aviv.  Like Georgia, grapes have been grown here since the beginning of time.  The Levant features a great climate, unique elevations, terroir, unique varieties and a blend of Old World and modern winemaking styles.

We tasted wines from Cremisan Wine Estate, which is located between Israeli apartment blocks and Palestinian luxury villas in a monastery that dates to 1885, founded by Don Bosco, the founder of the Silesian order.  It is maintained by a Catholic order of monks who continue their charitable works in the Holy Land, including a school and an orphanage in Bethlehem, through the sale of wine.

Aside from doing amazing things, these guys make really great wines.  World- renowned enologist Riccardo Cotarella – most noted for his Falesco winery in Italy – is now part of the Cremisan Winery, where he saw everything needed to make great wines and decided to make an impact.  He paid for young Palestians to go to Italy and receive a viticulture education.  The wines are dry farmed and organic and Cremisan was the catalyst in emerging trend of making wine from lesser known indigenous grapes 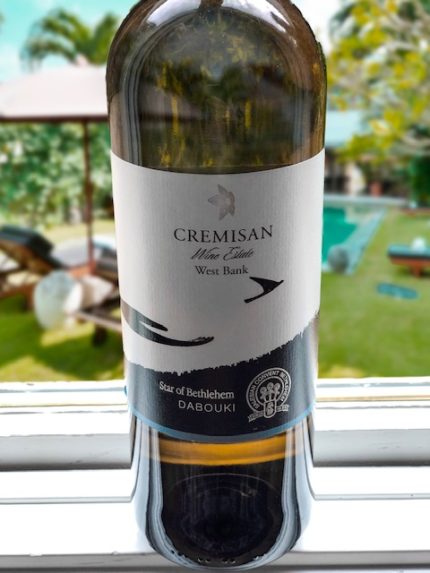 We tasted three wines from Cremisan Wine Estate including:

2016 Cremisan Wine Estate West Bank Dabouki.  All of these varietals were new to me and I liken this to a dry Riesling or a Gruner Veltliner.  I tasted notes of lemon curd, white flowers and a nice minerality from the limestone soil.  This native grape is from vines that are 80 to 100 years old and Cremisan was the first to use this grape, which is now much more mainstream in the region. 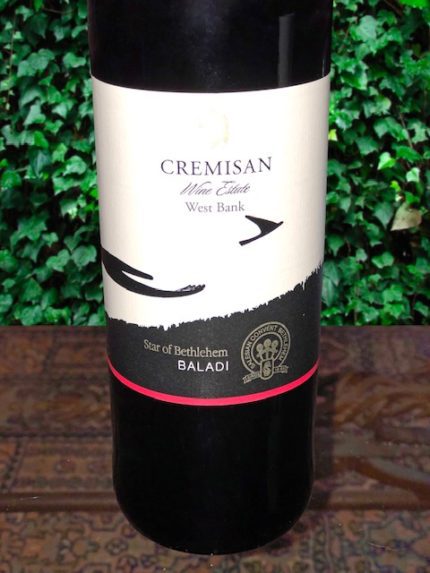 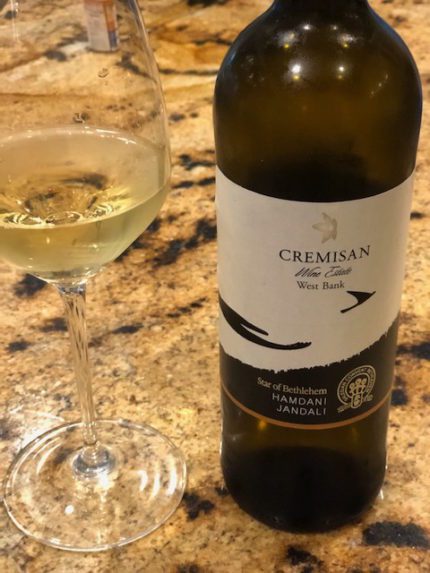 2016 Cremisan Wine Estate West Bank Hamdani /Jandali – this was similar to a Chenin Blanc and made by two indigenous grapes (Hamdani and Jandali).  I tasted apple, citrus zest, custard, flowers and lanolin.

The wines were unique and interesting.  The region is worth seeking out.  However, it’s a hard sell today as tourism is declining due to issues with civil disruption, access and importing, physical checkpoints, walls, water resources, bans of imports on equipment and psychological challenges of locals thinking the products are not world-stage ready. However, winemakers have stayed the course with the ambition of putting the region on the map and the wines are well worth seeking out on a consumer journey.