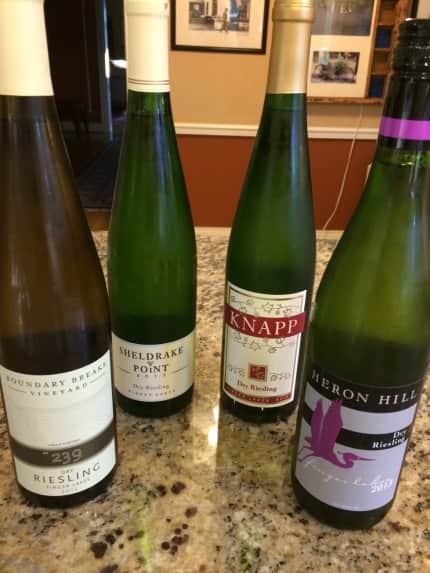 As a follow up to the announcement that the next Wine Blogger’s Conference will be in the Finger Lakes area, the Finger Lakes Wine Alliance asked me to participate in the 2013 Vintage Riesling Launch on Twitter #FLXRieslingHour.

Nineteen wineries participated to virtually celebrate the release of the 2013 Finger Lakes Rieslings.  The four wines sent to me came from Sheldrake Point Winery, Knapp Winery, Heron Hill Winery and Boundary Breaks Winery.  More than 50 bloggers engaged in spirited conversation and learned all about the diversity of the Finger Lakes region in New York.

Contrary to popular belief, Rieslings are not just sweet white wines – they can be bone dry to sweet and the taste profile can be very different.  In fact, the International Riesling Foundation came up with a taste profile with the help of wineries who voluntarily rate their wines to help consumers navigate wines produced after 2008.

The wines that I tried were diverse – one was very dry with lots of minerality while others were much sweeter.  The soil of the region, the shale that these grapes are grown in, diverse elevations and distance from water, result in very different wines.

The first was the 2013 Sheldrake Point Dry Riesling, which had notes of lime, petrol, stone, peach and tropical fruits.  The family-owned winery has been making wine for 15 years and is located in a very unique microclimate next to Cayuga Lake.  This was the driest Riesling of the bunch and it was the group favorite.

The second wine was the 2013 Knapp Winery Dry Riesling, which also had notes of peach and apricot.  It begged for an Asian food pairing. I really liked this, but I think that food was necessary to bring out the true complexities in this wine.  The winery is also located near Cayuga Lake and has been around since 1984.  It is the first winery in this association to plant Cabernet Franc.

Our third wine was the Heron Hill Winery 2013 Classic Dry Riesling.  This was a nice wine with hints of orange blossom, floral notes, minerality and stone.  The winery is located near Keuka Lake and has been around for 35 years.

Our final wine was the 2013 Boundary Breaks Vineyard’s #239 Dry Riesling, which was another great expression of the Riesling grape.  The winery property, which was a farm from 1850 until purchased in 2007, had its first vintage in 2013.  Very shortly after, The New York Times rated it in the top ten Finger Lakes Rieslings.  It was delightful – notes of peach, apricot, stone and flowers.

If this experience was an indication of what I’ll get to experience at the #wbc15, I’m looking forward to getting my Riesling on.

5 thoughts on “Wine Blogger Conference 2015 Preview: Get Your Riesling On”