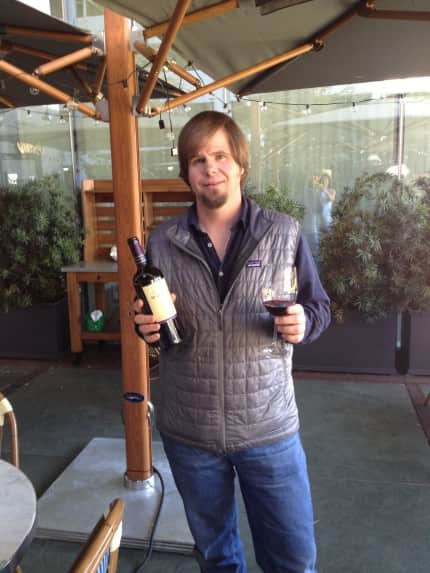 It’s rare you sit down with an individual that saw 175 Grateful Dead concerts, went on tour with them and lived to tell the tale.  Then you find out he’s an esteemed winemaker for Murphy Goode, a newly converted runner (lost 50 pounds since he started), believes in giving back to the community to bring his dad’s legacy to life and is just an all-around cool person.

David Ready started his career in winemaking in 1985 when his dad strongly suggested getting a job would be a good idea.  He grew up in Minnesota, played in rock band for a time and is a huge Vikings fan.  He worked harvests in Australia and Sonoma.  David moved back to California approximately 20 years ago and it’s been home since.  He worked his way up from cellar master to assistant winemaker and then served as the winemaker for Zinfandel in 1997.  Today he supervises 18 wines.

David came through town last month to talk about his Homefront Red release, which raised 300K for Operation Homefront, a 501c (3) organization developed to support the families of deployed service members immediately following 9/11.  The organization provides emergency financial and other assistance to the families of service members and wounded warriors.  And the cool thing is that the distributors and sales people for the winery have chipped in to support the effort as well.

Ready wanted to do this to honor his father who passed away during the fall of 2010.  He pondered what it meant to “do good” with the current owners of the winery.  His father served in Vietnam and his family has a long history of military service.  In his words, “Everyone knows someone who has served.  These kids go off in search of a better life, service our country, get hurt and then they and their families suffer.  No family should ever be left behind.”

He makes wines that he wants to drink and wants to match them with different foods and settings.  “I love a big cab, but not every day,” he said.  We tried a few and I want to continue to drink them too.  Clearly he has found his calling and you can tell he’s passionate about food, wine and socializing. We tried the following: