What was evolved into a group with the “tongue in cheek” name, The Dallas Wine Mafia,  recently met this month for round two of #BBWT.  The theme was Pinot Noir, which was less enthusiastically embraced by one of our members and we set out to try to prove him wrong.  What we didn’t know is that the theme turned more into the art of opening a bottle combined with the power of drinking wine out of the right glasses. 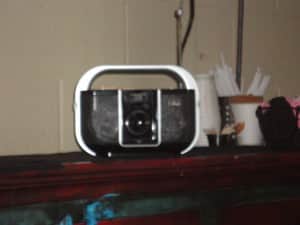 We gathered at Kozy’s, which is one of my favorite restaurants with no corkage charge.  They could not have been more hospitable and the organic menu of fish, game and chicken was a nice match with the wine.   For some reason though, that night the pop music was turned up and hearing the notes of “Party Rock” made me laugh.

I always try to bring an “off the beaten path” wine and today it was my friend Lindsay Woodward’s.  Lindsay is the owner of Retour, a newish winery that makes one wine, pinot noir, and blows it out of the water.  Lindsay’s creation was going to be my secret weapon.

But before I jump into the wines we tasted, I must make mention of the art of opening my bottle.  I was the last to arrive and the other wines were open.  One of the group had this super space age looking automatic wine opener that immediately ripped the cork in the Retour to shreds.  The chaos that ensued between several members of the group and the waiter to open the wine was comical.  Between a coffee filter, a knife and an old fashioned wine opener, we avoided floating cork and the day was saved. 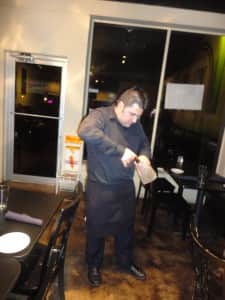 The wines we tried included the following: 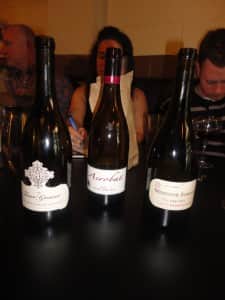 I also happened to bring a six pack set of Spiegelau wine glasses, which showed how much glassware can make a difference in showcasing the nuances of a good wine.  I loved watching the reactions of some of the group discover this for the first time.