When I got an email entitled The “Blind Wine Chick,” I was intrigued.  I assumed that it had something to do with testing my own palate in a blind tasting.  I quickly came to realize that the email was about Alexandra Elman, an American oenophile and successful wine entrepreneur, who lost her sight due to complications from diabetes at the age of 27. 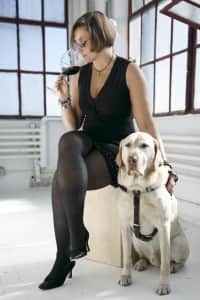 Elman was born to an oenophile father and a Brazilian chef mother.  She spent her youth in Brazil, France and New York exposed to food and wine.  These experiences honed her passion for wine and she worked for Perrier-Jouet Champagne in France and later Sherry Lehman.  Working for these firms exposed her to some of the lesser-known wines in the world, which seemed more honest to her than many of the larger labels.

Elman’s blindness never slowed her down.  She continues to search the world for the best wines to bring to the U.S.; however, now she has her seeing-eye dog, Hanley, as her companion.  In 2009, she created her own label, Alex Elman Wines, which was released in November 2010.  The focus – sustainability and representation of the wine’s terrior. 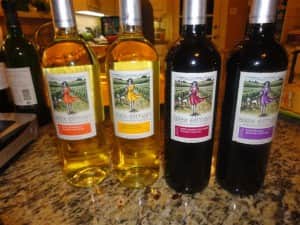 Our group tried four varietals from Argentina—a Chardonnay, a Torrontés, a Cabernet Sauvignon and a Malbec.  The two group favorites were the Chardonnay – yes, stop the presses!  It was a crisp white with notes of green apple, toast and vanilla.  In other words, a Chardonnay that appeals to those who do not usually like Chardonnay.  The other was the Cabernet Sauvignon with its big berry, licorice and notes of cedar.  All bottles retail for under $15.