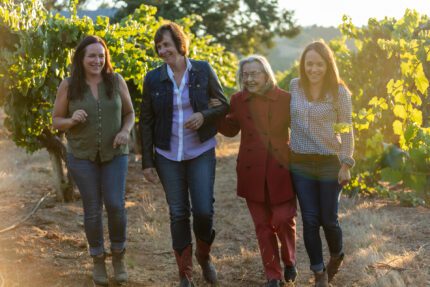 Bacigalupi Vineyards is one of the best kept secrets in the Russian River Valley. You may have heard the story of a 1976 tasting in which a California chardonnay gained world recognition by beating French burgundy wines in a side-by-side competition. That wine was made by Miljenko “Mike” Grgich from Chateau Montelena. But what is not widely known is the Chardonnay made with 40 percent of the grapes was farmed by the Bacigalupi family.

On this chat, we were invited to join two generations of female family members who helped to blaze that trail. We were joined by Pam Bacigalupi, who manages the vineyard and grape contracts; Katey Bacigalupi Row and Nicole Bacigalupi Dericco, who are Pam’s twin daughters and are responsible for sales and marketing, along with Winemaker Ashley Hertzberg to discuss the history of grape growing and wine-making in Russian River Valley and the influence of Helen Bacigalupi. 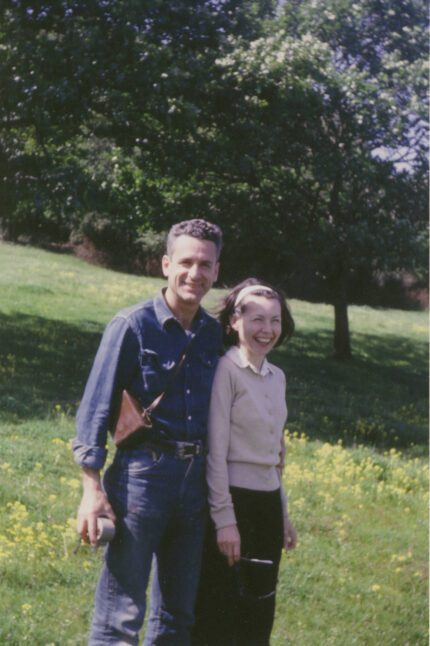 Charles and Helen moved to Healdsburg after graduating from school in San Francisco. Charles worked as the local dentist and Helen as a pharmacist. With an interest in farming, the couple decided to move to Westside Rd in 1956, and purchased 121 acres. Charles began to care for the 16 acres of existing vineyards which included Zinfandel, Mission, Golden Chaslis and Muscat. Through this practice, he became friends with Paul Heck of Korbel and they would talk about grapes and the vineyards. Paul encouraged Charles to plant Chardonnay and Pinot Noir.

As Pam stated, “they had never heard of either of those varietals.” He planted six acres of each and was eventually able to obtain Pinot Noir bud wood from Karl Wente, which came from France via the family’s old vineyard in Livermore. Charles and his son, John, worked together to learn what worked best in the vineyard and to expand what was planted.

For over 60 years, the Bacigalupi family has sourced fruit to some of Sonoma and Napa’s most well-known brands.

Pam recalled that the family isn’t too sure how Mike Ggrich first came to know about the Chardonnay planted by the Bacigalupi family. She just recalls her parents talking about how he was very aware of what he was looking for in his fruit and was the first of their wine buyers to truly look for flavors in the grapes.

When harvest arrived, Helen personally took six trips to truck the Chardonnay grapes over in her family’s 1973 Volkswagen truck gunning it to get over the hill to reach Chateau Montelena.

The family tells the story of Helen answering a phone call on the 4th of July when Mike delivered the news about the 1976 Paris tasting and how their fruit had helped to create the white wine that beat all French wines. Back then, no one knew about Russian River fruit, so the wine was credited to Napa Valley. But it certainly put the family on the stage for recognition.

John Bacigalupi has a lifetime of grape growing experience, 30 years of vineyard experience, and is  well-versed in finding the most appropriate varietals, clones, and root stocks to match the existing soil structures.

Pam grew up in the wine world and has childhood memories of the bottling line and walking the vineyards with her dad, Paul Heck from Korbel. She originally had an interest in enology, but it wasn’t winemaking wasn’t a popular career for women, so she became an ER nurse instead. She met her future husband through her father’s friendship with Charles Bacigalupi and later married his son, John. Not surprisingly, today she assists with the managing of Bacigalupi Vineyards. She is the main contact for grape sales and helps  deliver fruit during harvest.  She also worked to digitize the effort when she took over.

Katey Bacigalupi Row recognized her love of the vineyards early. Katey graduated with a degree in agricultural business from Cal Poly State University in 2006. She has vineyard and wine business experience at Seghesio and Sonoma Cutrer wineries as well as in Margaret River in Australia.

The girls talked about growing up with the hum of the tractor at 4 am and with the mist of cold grapes freezing your lungs. 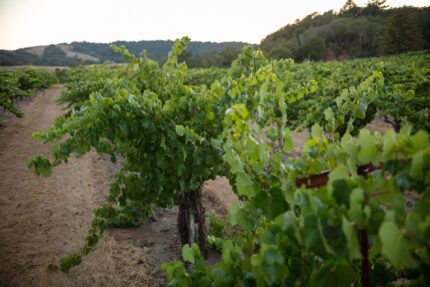 Goddard Ranch is the original property that was purchased and is still where Helen lives. It is known for minerality, a unique microclimate and diurnal range of temperatures resulting in wines with bright acidity and plenty of flavor. This is where the tasting block of the Chardonnay from the 1976 Paris Tasting is located.

Frost Ranch was purchased in 1990.  The land was previously owned and operated as a nursery by the Frost Family. Today Chardonnay, Pinot Noir, Zinfandel and Petite Sirah are grown at the site and it is the closest to the Russian River Valley.

All have different soils and microclimates.  Ashley stated, “all wines are made in the vineyard and I am a glorified babysitter. My job is to reflect what Mother Nature gave us each year.”

The winery focuses on farming sustainably and organically and produces between 2,000 and 2,500 cases depending on the year. 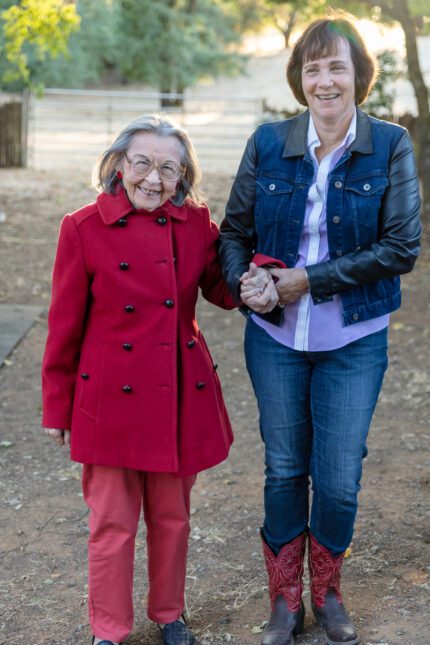 Helen and Pam; Courtesy of Bacigalupi

One of the early women pioneers and entrepreneurs in wine, it is clear Helen’s influence is still felt in the family and throughout the industry. Helen was responsible for negotiating and securing grape contracts. As one of the first women in wine in Sonoma Country, she gained a reputation for speaking her mind.

At 95, she still has two glasses of wine a day and pistachios “with the shells on.” Her words of wisdom or “Helen-isms” gathered from her along the way have been shared in a campaign on Instagram. The insights are smart — “Go With Your Gut,” or “Listen to Mother Nature.  You can find them on Instagram by following #helenswordsofwisdom.

Both Pam and Ashley talked about Helen removing limitations and paving the way. Ashley added, “Helen is my idol – she showed me that strong women could be successful in this industry.” 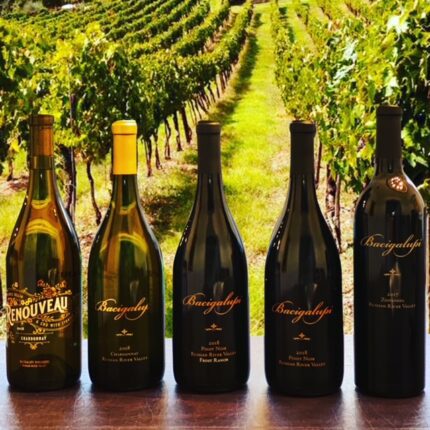 The Wines We Tried

2018 Bacigalupi Chardonnay Renouveau Russian River Valley ($82) – this block was under contract with other wineries until recently when the family had a chance to bring it back to its original roots. “Renouveau” is a French word meaning renewal and illustrates the rebirth of this vineyard into a new chapter. The wine was dedicated to Helen to honor her legacy.

Ashley talked about talking to the winemaker who worked with the fruit for 22 vintages and asked their opinion. She stated, “the beauty is all within that variation of what happens in the vineyard.”

2018 Bacigalupi Pinot Noir Russian River Valley ($69), was also worth seeking out and was the earthiest of the Pinots tasted. I tasted raspberries, plum, cherry, spice and earth. 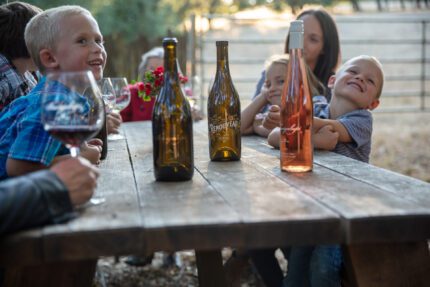 The Next Generation; Photo Courtesy of Bacigalupi

The Legacy and the Future

When Pam was asked about continuing the family legacy, she talked about walking the vineyard each year and thinking about all the blood, sweat and tears that have gone into making Bacigalupi wines successful and the need to carry that through for the next generation.

Her daughters echo her sentiments about how important that is to them. Nicole talked about the need to always make a better and more sustainable bottle of wine.

This family’s influence on changing the course of the story of the American wine scene combined with Helen Bacigalupi’s personal influence on women in wine is astounding. When you throw in how good these wines are, you understand the Bacigalupi family has an important place in wine history.

7 thoughts on “Tasting History with the Women of Bacigalupi Vineyards”