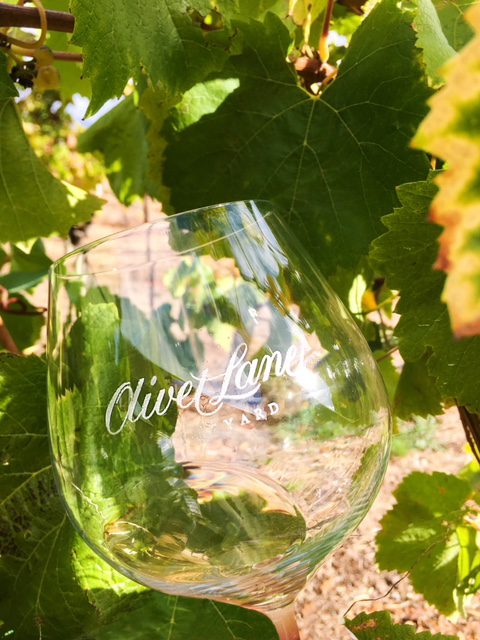 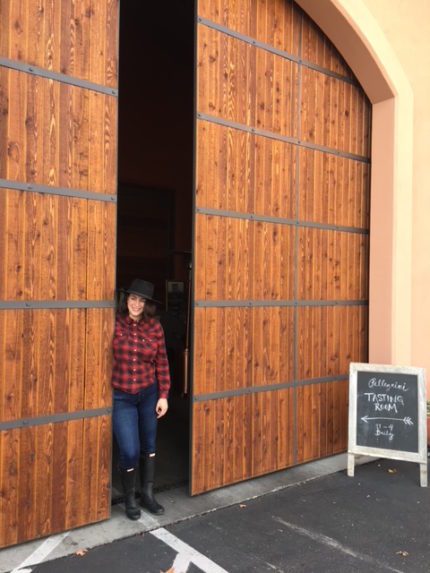 Our last stop en route to the Wine Bloggers Conference was to meet with Alexia Pellegrini, the Chief Operating Officer of Pellegrini Wine Company, where we joined Thea Dwelle and Megan Kenney for lunch and a fantastic introduction to the family winery.

The Pellegrini family traces its winemaking roots back to the 1900s when Nello and Gino Pellegrini arrived in New York City from Tuscany.  They moved to the West Coast and became Sonoma County grape merchants in 1925, shipping grapes throughout the US for home winemaking.  After Prohibition was repealed they established the Pellegrini Wine Company. 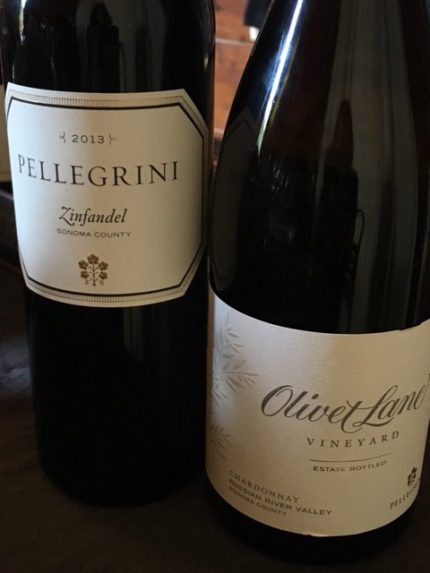 The family has produced, sold, imported and served as wholesalers for four generations.  The winery is located at Olivet Lane in the Russian River Valley, which is named for the mature olive trees lining the entrance of the vineyard.  The property was purchased in 1972 and was converted to a vineyard in 1975.  The winery is known for its Pinot Noir and Chardonnay.

The winery was revitalized and reopened in 2013 when Robert and Aida Pellegrini purchased the winery and vineyard from other family members and brought in Winemaker Lynn Krausmann.  After going to college for her design degree, Alexia, the fourth generation, was called back to run the family business in 2017 and returned because she believed she could make a difference. 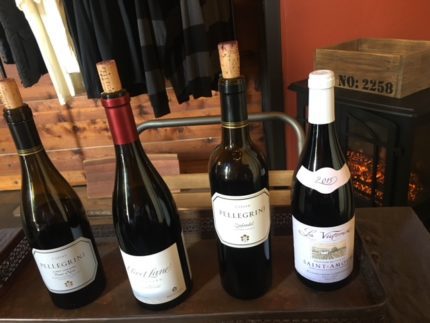 The family is dedicated to growing small lot, expressive wines that are representative of their regions.  We tasted through several appellation wines that day including Chardonnay, Zinfandel, Rose and Sauvignon Blanc as well as Pinot Noir and a few other side projects.  This was a winery that was once not on my radar, but will be one of my future “must stops” in the Russian River.

And that brings me to the tenth anniversary of the Wine Blogger’s Conference and some of my favorite memories: 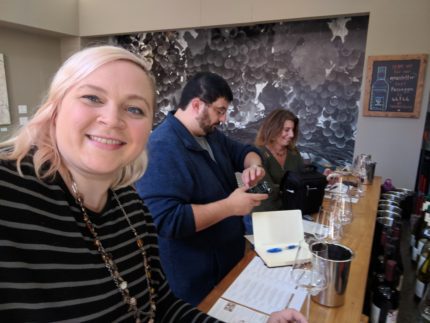 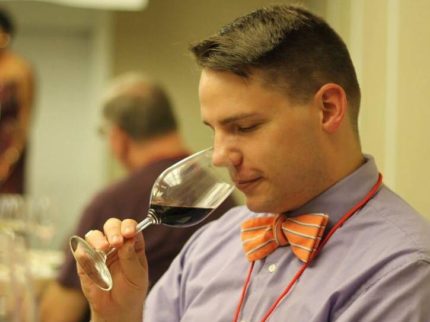 Mykha’el Wilson of Purveyor of Happiness

1.     Being Involved in The Wine Blogger’s Conference Scholarship Committee and EthniFact’s Sponsorship of Two Diversity Bloggers — Jenn Nelson of Wine Antics, and Mykha’el Wilson of Purveyor of Happiness.  My Uncle Mike Lakusta, serves as the CEO of EthniFacts, and this year he generously agreed to sponsor two scholarships that I was thrilled went to two people that I personally know well. 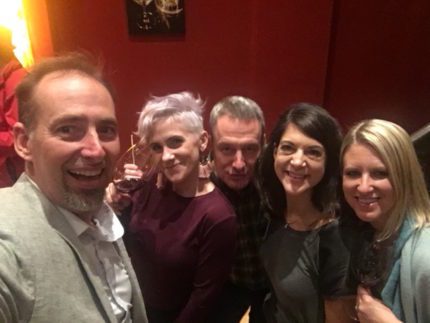 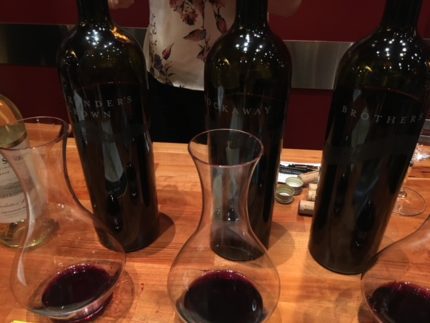 2.     Robert Larsen’s Kick-Off Dinner – Robert is always known for bringing together a group of the fun kids to kick off the conference.  This year, he brought us together over wines from Rodney Strong Vineyards, Davis Bynum Winery, Ramey Wine Cellars and for the first time, Robert’s wines from The Larsen Projekt.  How fun is that! 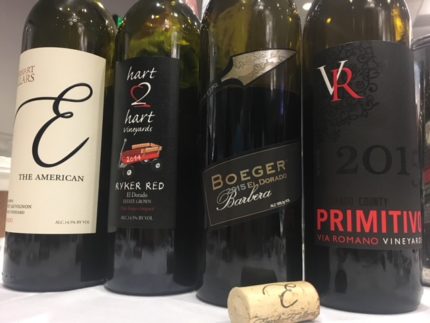 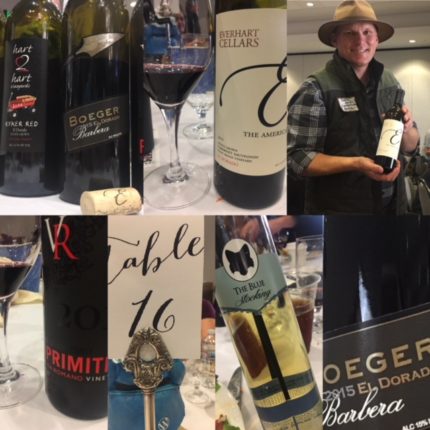 3.     El Dorado Wines – El Dorado is one of California’s oldest winemaking regions and more than 20 winemakers came to pour wine and have lunch at the conference.  We had a bit of a rocky start at our table since we seemed to be off the rotation, but I was impressed with the wines we tried.

California’s Gold Rush began in El Dorado County in 1848 when James Marshall discovered gold at Sutter’s Mill.  Winemaking became a side business with the influx of people coming to claim their fortunes and by 1870, El Dorado County was the third largest wine producer in the state until Prohibition.  In 1973, with the opening of Boeger Winery, the region bounced back and today has more than 2,000 acres of wines and is home to 50 wineries. 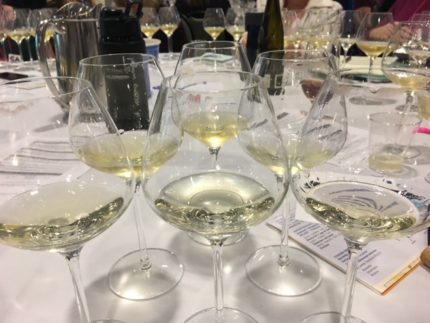 4.      An Educational Session about Consorzio Tutela Lugana DOC led by Deborah Parker Wong, DWSET.  I have long yearned for educational sessions about regions like I have experienced at other conferences and #wbc17 delivered this year!  Deborah took us through a tasting and discovery session about Lugana’s terroir, its winemaking and the diverse wine styles from Turbiana.  We tasted current and late harvest vintages showing aging potential.  It was a great way to celebrate the region’s 50th anniversary and I really enjoyed learning more.

5.     Take Your Camera Off Automatic.  We had a session led by Jeff Burrows from Food Wine Click!, an amazing blogger and photographer who spent a session giving us tips on how to take better food, wine and travel photos.  The session was pertinent for those who were remedial like me as well as to those who already had a home studio. 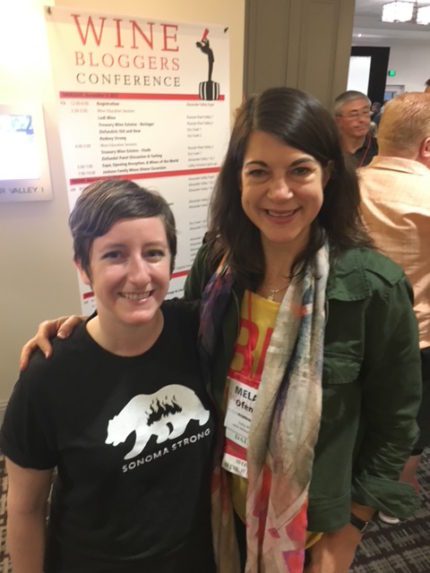 6.     How the Community Came Together in a Time of Crisis.  In October, 250 wildfires started burning across the state in Napa, Lake, Sonoma, Mendocino and Butte Counties and burned 245,000 acres.  There were two panels bringing together locals who not only lived through the fires, but were on the front lines during the crisis.  George Rose, Well-known Photographer; Pierre Bierbent: Winemaker at Signorello Estates, whose winery was destroyed in the fire and Patsy McGaughy: Communications Director at Napa Valley Vintners.

This session was followed up with a session featuring George; Sarah Stierch, who launched her own one woman Superhero campaign which alerted people on social media of what was happening when no one else was; as well as Wine Enthusiast Writer Virginie Boone.  They focused on the topic “How Media Can Respond to a Crisis.”  I have my own personal experience with a house fire so seeing my friends in crisis was just heartbreaking.  The important take away is that wine country is open for business and recovery comes when you visit, buy wine and support tourism. 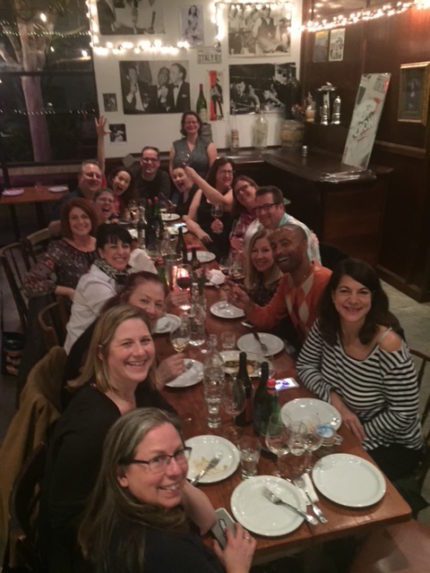 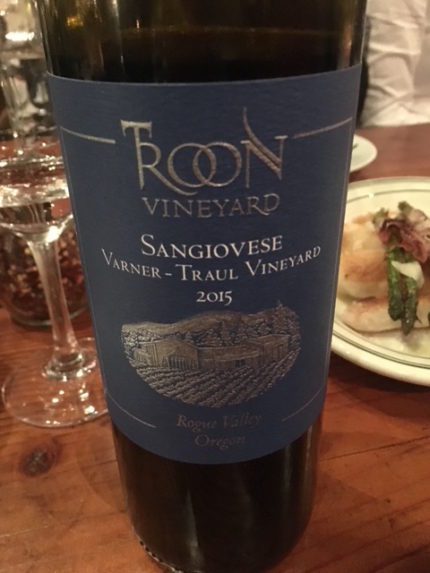 7.     Going Rogue Dinner with Craig Camp – this is a time-tested tradition and one that I am honored to be a part of each year.  Craig gathers a group of good friends, holds a dinner, opens his delicious wines (we switched from Cornerstone to Troon wines two years ago when he made the move from California to Oregon) and we laugh, cut up, drink and enjoy each other’s company.  It is always one of my favorite nights with some of my favorite people every Wine Bloggers Conference.

8.     The Legal Wake Up Call – learned a lot of scary things with this panel about legal compliance, samples and staying out of trouble.  Fellow Bloggers and Regulatory Affairs Expert Doug Levy and Lawyer Seth Buckley gave me a wake up call that I needed to hear. 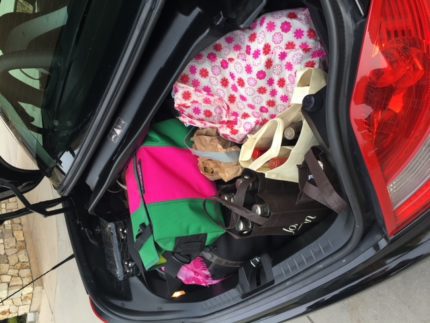 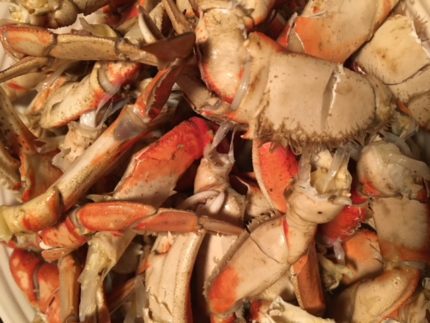 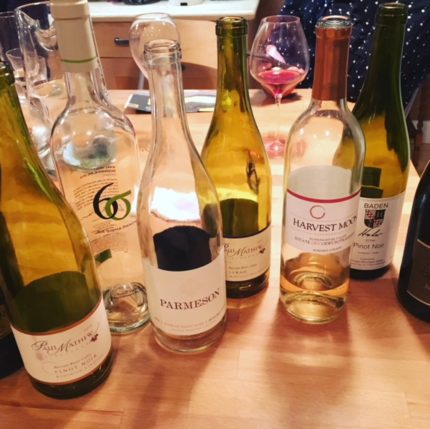 9.     How Friends Came Together in a Time of Need – What happens when you bring a very large suitcase to the Wine Bloggers Conference only to find that there is no way that it will fit in your friend Liza Swift’s brand new two-seater car?  Your knight in shining armor, not only drives it back to the city for you, but hand delivers it to Liza’s house.  Fred Swan, you remain my hero.  And, Liza, I’m still dreaming about the crab dinner that you cooked that night and I loved meeting your friends. 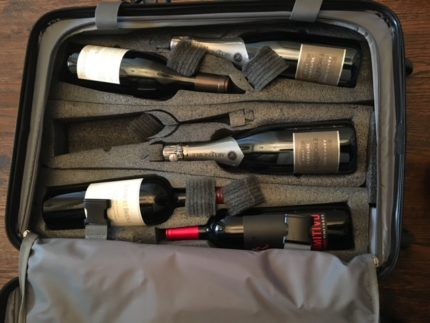 And, then when you amass more wine than can fit in your luggage, you find that there is a spare VinGuard Valise (the best suitcase ever) with a story that has saved bloggers in the past with the same fate as you.  Twelve bottles came home with me and I now have a second VinGuard Valise in my possession with an understanding that any blogger that finds themselves in the same situation in Dallas has the same escape plan as I do. 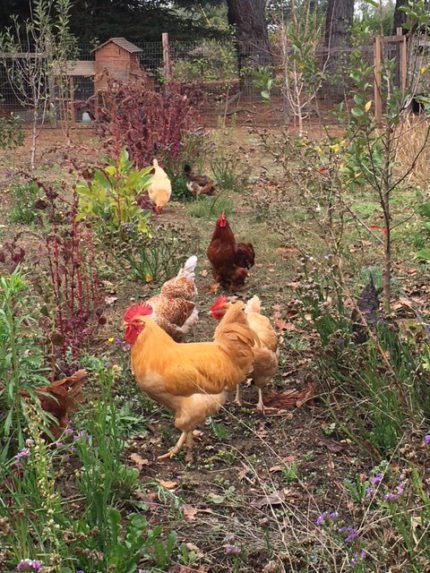 10.  The Post Trip with Two Dear Friends – Liza and I journeyed to meet up with one of my favorite people, Marcy Gordon, in Santa Rosa who showed us some of her favorite wineries after the conference.  We started at Horse & Plow for our first stop.  Suzane Hagins and Chris Condos started the winery in 2008 merging old and new world techniques and produce authentic, hand-crafted wines from organic grapes using biodynamic techniques. 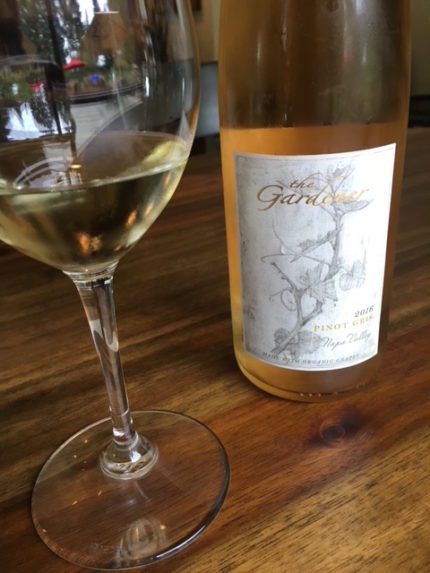 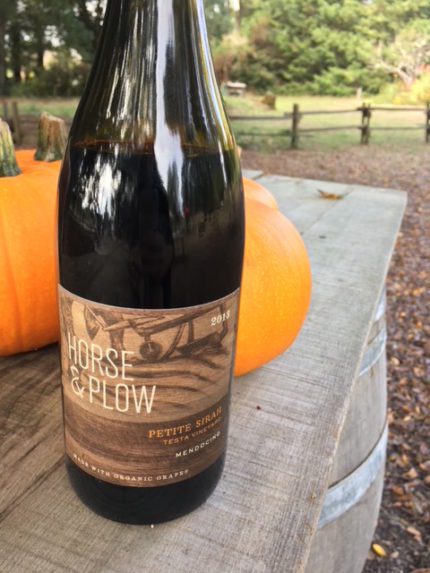 We tasted through two flights – the Gardener and the Horse & Plow – showing the diversity of the wines, which were so diverse and delicious. 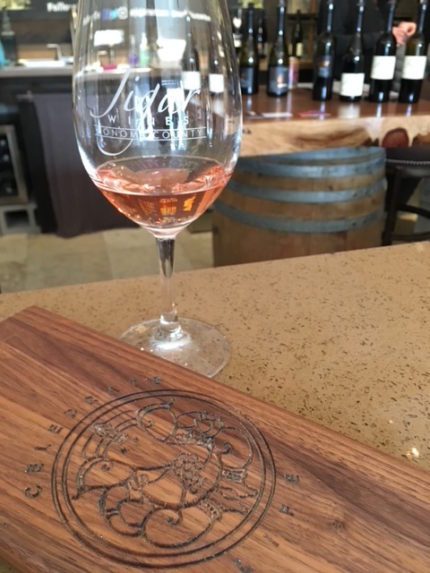 Our next stop was Jigar Wines, which is a family-owned boutique winery with some of the best wine merchandising that I’ve ever seen in a winery.  I really enjoyed the Rose, Pinot Noirs and the Zinfandel that we tried.  And, Paul was an awesome host. 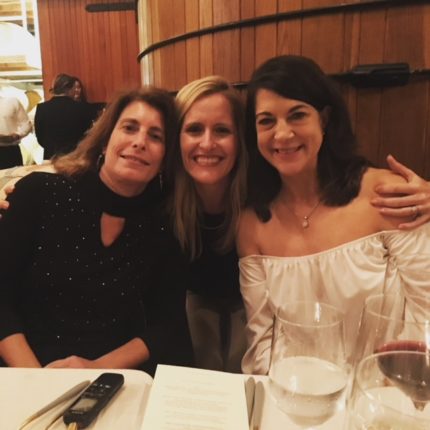 Debbie Gioquindo, Lisa Mattson and me

11.  Lisa Mattson — This trip would not have been the same without the Jordan dinner and fire fund raising luncheon that was thrown by Lisa Mattson, communications director of Jordan.  These events were so spectacular that they deserve their own post next week.