So, if you had a huge opening of your new wine tasting room and world headquarters scheduled the next day in Walla Walla complete with lots of pre-event hype and only had one hour to get from the airport to the ribbon cutting, would you risk attending a party in Dallas the night prior?  Charles Smith would.  Why?  Because he made a promise to his friend, Pioneer Wine Company Owner Greg Kassanoff, and he doesn’t break promises. 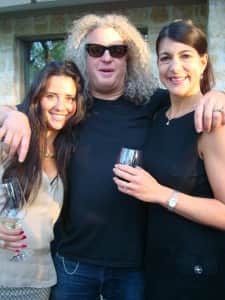 My first encounter with Charles and his breath-taking wife, Ginevra Casa, the maker of Secco sparkling, happened during last year’s Wine Bloggers Conference in Walla Walla.  A group of bloggers were invited to his pre-party, which was held at the site of his new wine tasting room in a former auto shop.  As we walked in the door, we were handed plastic cups of his Boom Boom Syrah and were greeted by the sight of Burlesque dancers.  Did I mention they were wearing flaming pasties?  Yup, not exactly what I expected for Walla Walla.  I actually turned 41 that night and credit Charles for throwing me one hell of a birthday party.

Charles is a controversial guy with a rock star manager background who is one talented winemaker.  He’s non-conventional, from the Sammy Hagar flowing locks to the “no holds barred way” that he does business to the way that he markets his wines taking cues from how the music industry markets.  He told me that he’s about staying true to his brand.  He’s the largest wine maker/business owner in Washington and just wants to make wines that reflect his rocker sensibility.  In his words, “It’s just booze.  Drink it.” 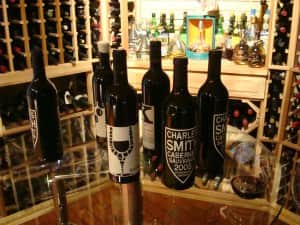 I had the chance to try the K Vintners 06 Guido, which was an 80/20 blend of Sangiovese and Syrah.  It was smooth with some earthiness, tobacco, cherry and leather.  We were then in for a big treat – the unveiling (and sorry folks you can’t get it in Texas yet) of the Charles Smith Cabernet 08, the first Cab bottling from the Stone Ridge Vineyard site.  It was big and concentrated with hints of cedar, cherry, bramble, mocha and spice.  We then moved to the K Vintners El Jefe Chamberlin 08, which was a 75/25 tempranillo and cabernet sauvignon blend with lots of spice, blackberry and smoke.

I’m glad to report that Charles did make it to his grand opening and naturally it was a rocking success.

2 thoughts on “Party Like A Rock Star: A Night With Charles Smith”