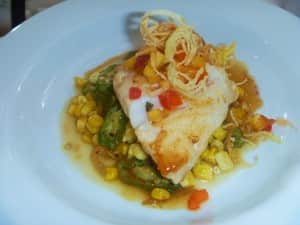 I attended the third annual 2011 Dallas/Fort Worth Chefs Under Fire Regional Culinary Competition last month at the Milestone Culinary Arts Center.  The contest, which is sponsored by the Keep Collection, LLC, was won by Kevin Martinez of Tokyo Cafe with a dish of seared tilefish, fresh peach and tomato salsa on a corn and okra-yuzu succotash topped with crispy shallots.  It looked great.  However, only the chef judges – Chef Tim Byres of SMOKE, Katie Natale of Four Seasons Resort and Club and Sharon Van Meter of Milestone Culinary Arts Center got to try the dishes. 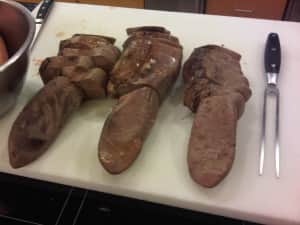 The Wine Matching Challenge of a Lifetime

The rest of us had an array of appetizers to taste and a wine and food demo from Commissary Chef John Tesar, who prepared beef tongue, and Sommelier Scott Barber who had to match the dish with wines.  The question of the day is what wine do you serve with beef tongue?  Barber recommended two whites and a red. 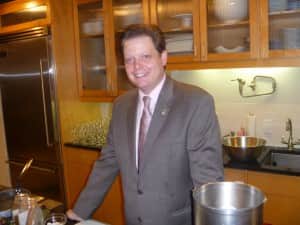 Scott Barber, the Man with A Plan — Courtesy of Steven Doyle, Crave DFW

Gene and Julie Gates of 103.7 Lite FM cracked me up as guest emcees of the event.

Chef Martinez will now advance to compete at the Chefs Under Fire final competition to be held on October 16 in Austin, TX.  There, he will compete against Chef Daniel Valenzuela, a student at Escoffier School of Culinary Arts who won the Austin/San Antonio challenge, as well as the Houston Regional Winner for a one week stay in Los Cabos.