Fourth of July.  It’s more American then apple pie, mom and tasting French and Chilean wines?  Let me explain.  I found myself over the Fourth of July weekend on a beach trip with my husband’s family.  Picture one beach house in Sandestin, eight adults and six kids (with all six under the age of six and a half).  Usually not ingredients for a successful wine tasting, but my husband’s family had indicated an interest in wine tasting.   In the beginning, I had my reservations with my husband blasting beach music, a Pixar movie on the screen, kids eating dinner and the family gathered around a small coffee table with one glass in hand.  But soon, the kids were happy, the electronics were off and we were discussing the wines.

Due to a schedule mix-up, the Planet Bordeaux people had sent over some samples earlier this year for a Twitter Live Tasting while I was out of town.  We discussed conducting a tasting of my own at a later date and this seemed like the perfect opportunity.  The Planet Bordeaux folks are trying to get the word out about what Bordeaux and Bordeaux Superieur AOC wines have to offer.  Superieur Bordeaux’s are inexpensive, but come from a specific vineyard with a set amount of age.  I was surprised at the differences in appellations, blends and tastes of the variety of Bordeaux wines provided.  And that was a good thing because the folks in the room couldn’t have more different palates.

The wines tasted included the following: 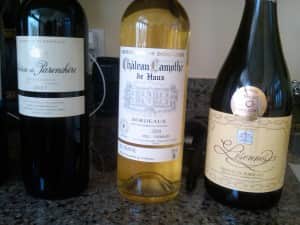 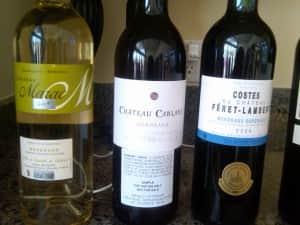 The next day we decided to expand our journey to Chilean summer white wines provided by Banfi Vintners.  We first focused on the Casablanca (aka Carneros South, which is north of Santiago), region of Chile, which is known for cooler temperatures and compared on occasion to California’s Carneros region. 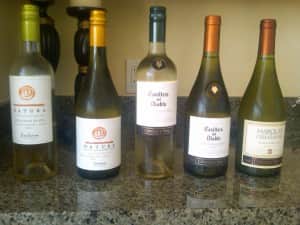 Emiliana Organic Vineyards, the world’s single largest collection of estate-grown wines, produces their wines from organically grown grapes.  Their winemaking is directed by Alvaro Espinoza, known for being a visionary for organic, biodynamic and eco-balanced wines.

We started with the 10 Natura Sauvignon Blanc ($11) and Chardonnay ($11).  I smelled oranges, citrus, grapefruit and something floral.  I enjoyed this wine better on the second day as it was more balanced.  The Chardonnay had lots of tropical fruit and almost a nutty flavor.  My mother-in-law named this as her favorite.

We then moved to the 10 Casillero del Diablo Sauvignon Blanc ($12) once named “Devil’s Cellar,” after the owner spread a rumor about his cellars being haunted by a devil after a robbery.  It’s crisp, fresh and tropical – definitely the favorite of the group.  We followed that up with the 10 Casillero del Diablo Chardonnay ($12), which had lots of tartness, fruit, citrus and a crisp finish.

Our final wine was the 09 Marquis de Casa Concha Chardonnay ($18), which is from Limari, the “Land of Cold Light” known for the presence of limestone soil.  This was a much meatier wine with buttered toast, vanilla and citrus flavors.  This was also a divisive wine with half of the tasters naming it one of the top wines and the other half in disagreement.

It may have not been the most traditional thing to do on a fourth of July weekend, but then again, what better time to experience different wine with your family?  And, sometimes wine is the ingredient needed for all that togetherness.