You may ask what Dita Von Teese, the International Queen of Burlesque, and Cointreau Liquor have in common.  More than you would think.  I had a chance to talk to Dita again last month during her trip through Dallas where she served as the brand ambassador for Cointreau at a poolside event at Ku de Ta.  You may recall that she came through Dallas last year, where she paid homate to Margarita Sames, the Dallas socialite who created the original Cointreau Margarita in 1948. 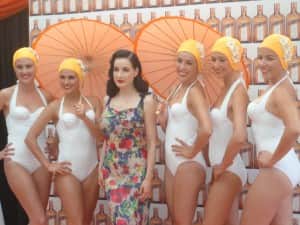 Dita and I talked the synergies – she does her burlesque act in a giant cocktail glass, the brand is sophisticated, it’s international and Cointreau supports her vision for her brand.  Of course I had to ask her about her favorite wine and she enthusiastically declared it as champagne.  When pressed a little more, she told me that she dates mostly European men and that they know good wine. 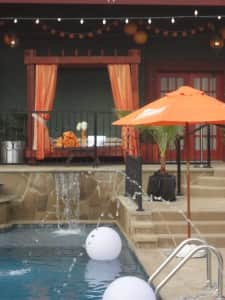 The party , with about 200 guests, was fun and included a special synchronized swimming performance by the Aqualillies who definitely had a “Mad Men” 1950’s vibe.